Local media reported on the issues at the medieval site, one of the major monuments of cultural heritage in Georgia, on Monday, with the National Agency for Cultural Heritage Preservation of Georgia releasing its reaction later on the day.

Reports have indicated leakage of rainwater through roof tiling of the St Mary Temple, the principal part of the complex, and subsequent damage to interior frescoes, caused by the water running down its walls.

The newly completed roofing, built by the Georgian Arts & Culture Center as a contracted organisation for the long-standing, ongoing rehabilitation efforts on the site, has reportedly been damaged by climate conditions since last winter, however the heritage agency and independent professionals disagreed on various aspects of the issue.

Nikoloz Antidze, general director of the state agency overseeing rehabilitation work on Gelati, confirmed the problems caused by adverse climate conditions and said the issue was "problematic", but added the faults were "definitely not a catastrophe" and the process was "under control". 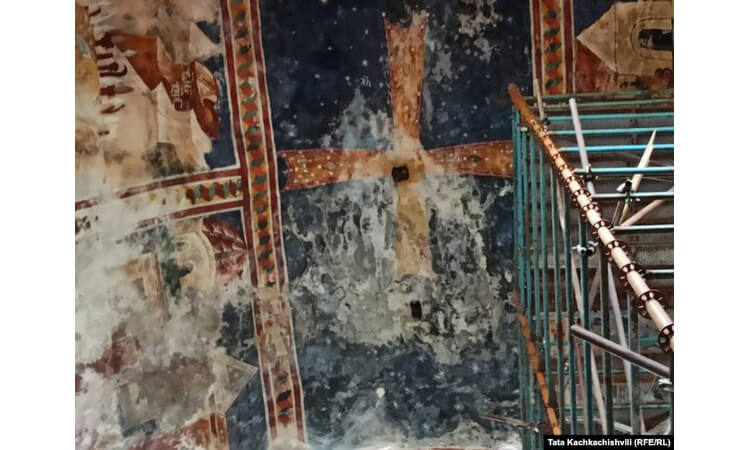 One of the interior frescoes in the monastery reportedly damaged due to rainwater leaks penetrating the roof of the building. Photo: Tata Kachkachishvili/Radio Free Europe/Radio Liberty.

Antidze told Radio Free Europe/Radio Liberty the roofing would be replaced due to a lack of quality in a part of it, but denied the issues with the tiles had caused the leaks that damaged the frescoes.

The head of the agency told reporters of the website the first reports on the damage to the tiles had been received by his organisation in February, with the company involved in the rehabilitation work tasked in March to solve the deficiencies.

In their comments, staff working at Gelati told Radio Liberty rainwater had leaked into the building a number of times over the past few years - during replacement work on the roof - and damaged some of the frescoes.

Responding to the reports, art historian Mzia Janjalia told TV Pirveli the roofing had a number of issues beside the failed tiles and added the damaged frescoes could not be restored. Janjalia told the channel the roof needed to be freshly relaid in a way that would prevent the leaks in the future. She also said in a phone call with reporters of the channel a proper solution to the issue needed to involve foreign professionals.

Responding to the latter point, Kakha Trapaidze, a co-author of the rehabilitation project for the complex, said in his comments to the channel the rehabilitation efforts did involve international experts and underwent "three or four" UNESCO World Heritage Centre inspections.

The monastery will now see a temporary roofing built over it, before the roof tiling is completely replaced. 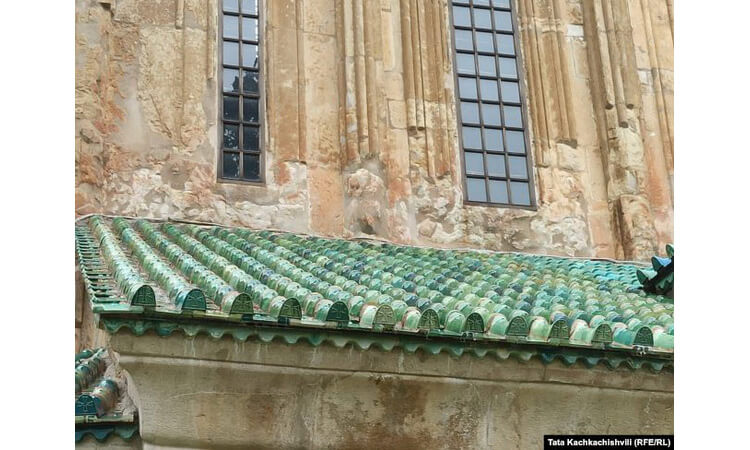 The roof tiling has been installed on the main part of the complex during recent rehabilitation work. Photo: Tata Kachkachishvili/Radio Free Europe/Radio Liberty.

Rehabilitation of the Gelati complex, a major work of national importance, was launched in 2008 and involved both state and international support, including from the World Bank, the Ambassador's Fund for Cultural Preservation at the United States Embassy in Tbilisi, and the Municipal Development Fund of Georgia.

Rehabilitation of the St Mary Temple of the complex was started four years ago, with professionals involved in the work using roof tiling made to resemble tiles discovered around the site in the mid-1980s and considered to have been used in the original roofing of the 12th century building.

The Gelati complex had been part of the UNESCO World Heritage List since 1994, when it shared the spot with the nearby 11th century Bagrati Cathedral. They were placed in the UNESCO list of endangered sites in 2010, when government-led restoration works, initiated in defiance of UNESCO regulations, led to the international organisation's warnings on "irreversible interventions carried out on the site".

Following years of work by the new Georgian government, Gelati was re-accepted in the World Heritage List as a separate monument, with the decision announced at the 41st UNESCO World Heritage Committee meeting in Krakow, Poland in 2017.

Located outside the western Georgian city of Kutaisi, the monastery is noted by the UNESCO for representing "the masterpiece of the architecture of the 'Golden Age' of Georgia and the best representative of its architectural style".