Frescoes of the interior of the Gelati monastery complex, a UNESCO World Heritage Site in Georgia's west, are "in very bad condition", experts from the global body have said at the first press conference following the start of their work to study damage caused to the monument.

Arriving in Georgia to launch their examination of the frescoes and roofing of the site last week, the group of professionals made their preliminary comments at the press event on Monday, where they revealed both the infiltration of rainwater into the monument and the process of its frescoes receiving damage were ongoing.

Architect Ugo Tonietti, a member of the International Council on Monuments and Sites and retired professor in Static and Stability of Masonry and Monumental Buildings at University of Florence, said the situation around the roofing of the monument was "not an enviable one".

Tonietti told local press the visiting team had checked the situation of the roofing on a daily basis since their visit, and was working to identify reasons for ongoing rainwater leakage through the structure. The ICOMOS expert said the studies were aimed at identifying mistakes made during the process of replacing the roof with new tiling, launched locally and revealed in 2020 to have led to leaks into the monument. 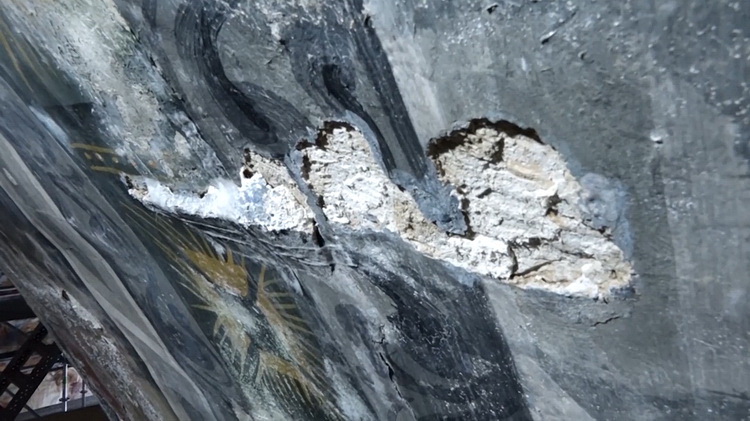 A view on a section of the interior wall painting of the monument. Screenshot from culture ministry video.

Frescoes inside the Gelati building are in "very bad condition" after having been affected by the infiltration of rainwater, Tonietti confirmed to reporters, adding "steps are necessary to change the present picture" in the interior of the World Heritage Site. Upcoming studies in Italy on the collected material are expected to provide the involved professionals with cues for the necessary actions for resolving the problems.

Speaking alongside Tonietti, wall painting expert Vincenzo Centani told the Georgian press the infiltrating water had caused shifts in salt substances inside the walls, leading to damage to the paint of the frescoes, with the southern section of the monastery showing the most amount of damage.

Centani said the damage to the frescoes was still ongoing, but added it was possible to halt the process "with a correct approach".

The two experts were invited by the culture ministry to help identify the core causes for rainwater infiltration and fresco damage and outline recommendations for upcoming actual restoration work at the site. Their notes are expected to be sent to their Georgian colleagues in mid-July.