Georgian, Turkish and Azerbaijani foreign ministers have signed a new, 2020-2022 action plan for sectoral cooperation during the eighth meeting of the trilateral format held in Tbilisi earlier today.

The action plan provides steps and actions in all the fields of cooperation between the countries which will benefit the interests of Georgia, Turkey and Azerbaijan, the Georgian Foreign Ministry reports.

Georgian Foreign Minister David Zalkaliani has stated that the meeting was “very successful” and was particularly focused on regional transport and energy projects.

We have once again highlighted the importance of the implementation of the Trans Caspian Pipeline and the role of Georgia, Turkey and Azerbaijan in transporting the energy products from the Caspian region to Europe,” Zalkaliani said.

He stated that all three countries are ready to continue coordination for a full-fledged implementation of a trilateral energy corridor.

We agreed that the completion of the second phase of the Trans Anatolian Pipeline was very important which was inaugurated on November 30 in Turkey. The implementation of the project supports the creation of a new energy reality for Europe,” Zalkaliani stated. 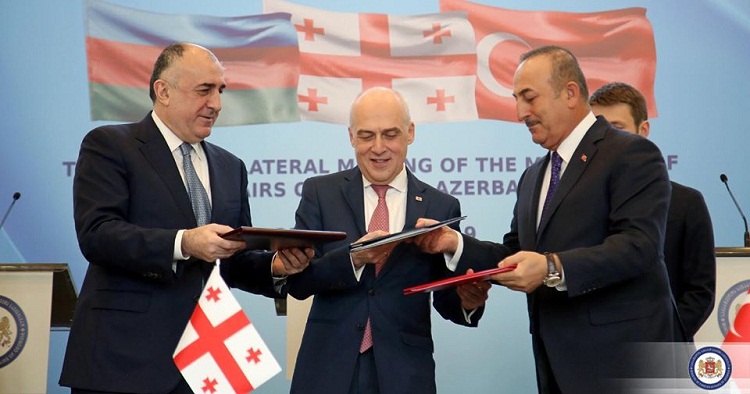 Zalkaliani said that Georgia, Turkey and Azerbaijan, taking their geopolitical location and transport potential into account, give high importance to strengthening of cooperation for undisturbed functioning of the Europe-Asia connecting corridor.

We have expressed readiness to cooperate closely to maximally, internationally reveal our transport potential,” Zalkaliani said.

He stated that Baku-Tbilisi Kars railway has become a “very competitive route” for transportation of loads between Europe and Asia, saving time and money.

We particularly emphasised the role of the three countries in the historic Silk Road, connecting Europe with Asia, and welcomed the Silk Road Forum held in Tbilisi in October,” Zalkaliani said.

He stated that the countries  agreed to take steps to strengthen cooperation between business circles and conduct trilateral business forums.

Azerbaijani and Turkish FMs spoke about the importance of joint projects for local and international interests.