A Swedish-Georgian-French co-production And Then We Danced has premiered in Georgian cinemas today amid radical groups' protest.

Protesters led by the Head of the Children Protection Public Movement Levan Palavandishvili, businessman Levan Vasadze and the ultra-nationalist Georgian March gathered in front of Amirani Cinema in the Georgian capital of Tbilisi, hindering people to enter and watch the film.

The police which promised to ensure safety and freedom of expression amid threats voiced by ultra-nationalist groups earlier today, have detained eleven protesters for violation of public order and police disobedience.

The Interior Ministry reported that pyrotechnics was also used in front of the cinema ahead of the premiere.

The Interior Ministry again calls on everyone to obey the law. Otherwise, police will act within their mandate and each violation of public order will be followed by a strict responce", the ministry stated.

It also informed that all the screenengs were started without delay at all the cinemas. However, police remain on the ground to ensure public safety. 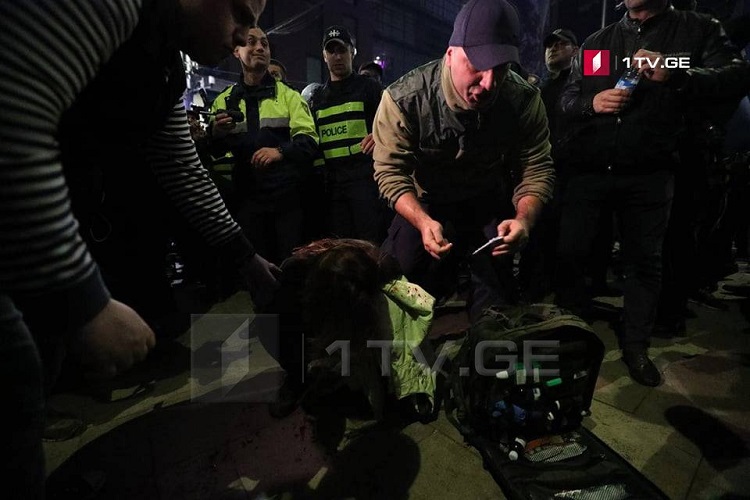 Investigation is underway over the attack on Ana Subeliani, who was unable to enter the cinema and instead received injuries. Photo: 1TV

Meanwhile, yesterday, the United States Embassy warned US citizens "to avoid any and all large gatherings as the potential for unanticipated violence exists".

The film directed by Levan Akin, which has been picked as Sweden's submission for the Best International Feature Film competition at the next Academy Awards, has premiered at Tbilisi and Batumi cinemas today.

Akin wrote on his Instagram page that "it is absurd that people who bought tickets need to be brave and risk getting harassed or even assaulted just for going to see a film".

So many people have asked me about what’s going on in Georgia regarding the premiere of And Then We Danced on Friday the 8th. Some far right groups and the Church have basically condemned the film and are planning to stop people from entering the sold out screenings. It is absurd that people who bought tickets need to be brave and risk getting harassed or even assaulted just for going to see a film. I made this film with love and compassion. It is my love letter to Georgia and to my heritage. With this story I wanted to reclaim and redefine Georgian culture to include all not just some. But unfortunately these are the dark times we live in and the pending protests just proves how vital it is to stand up against these shadowy forces in any way we can. Over and out. ????❤️ #andthenwedanced

Akin's work is the story of a young performer Merab in the Georgian national dance company who develops an intense attraction to newcomer Irakli.

Portrayed by Levan Gelbakhiani, Merab is "thrown into an emotional storm of both strong desire and jealousy for his new companion" (Carl International Film Festival), with the encounter between the two male performers unfolding in the conservative dance company.

The film will be shown in Georgian cinemas between November 8 and 10. All tickets have already sold out.