The Georgian Interior Ministry has promised to ensure safety and freedom of expression amid threats voiced by ultra-nationalist groups just before the premiere of And Then We Danced movie in Tbilisi and Batumi cinemas starting later today.

The ministry urged everyone to stick to the law, “otherwise we will use the power granted by the law and any incident will be prevented in a timely manner.”

Filmmaker Levan Akin's Swedish-Georgian-French co-production And Then We Danced, which has been picked as Sweden's submission for the Best International Feature Film competition at the next Academy Awards, will be premiered at Tbilisi and Batumi cinemas starting at 8:30 pm today.

The film was premiered at this year’s Directors’ Fortnight festival in Cannes in May.

Head of the Children Protection Public Movement Levan Palavandishvili, businessman Levan Vasadze and the ultra-nationalist Georgian March have announced they will go to the cinemas not to allow the showing of the film “which is against Georgian and Christian traditions and values and popularises the sin of sodomy.”

Akin has responded to the threats, saying "It is absurd that people who bought tickets need to be brave and risk getting harassed or even assaulted just for going to see a film.I made this film with love and compassion."

The Georgian National Film Centre has expressed concern regarding the “statements of extremist groups” against the premiere, expressing its “full support” to the film crew and the cinemas.

The Georgian constitution guarantees the freedom of creativity. Any involvement or censorship in the creative process is absolutely unacceptable,” the centre says.

The Georgian Patriarchate has come out against the film but said that the “church distances itself from any violence.” 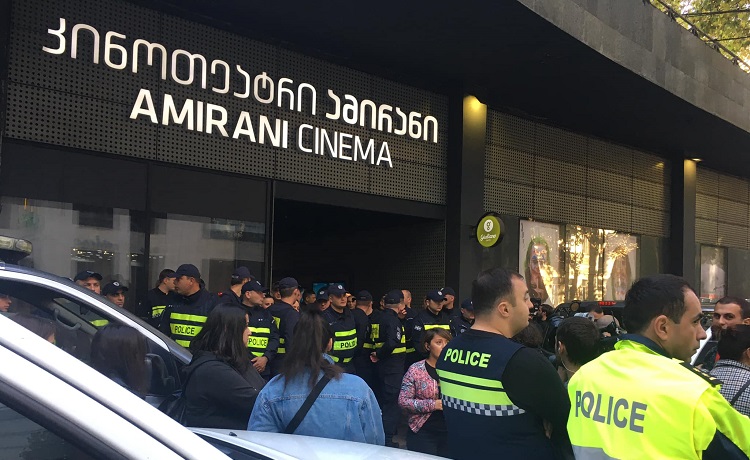 Georgian Public Defender Nino Lomjaria says that every individual is free in their decision of what to watch.

Georgian Parliament Speaker Archil Talakvadze says that “if I have a chance I will watch the film.”

Akin's work is the story of a young performer Merab in the Georgian national dance company who develops an intense attraction to newcomer Irakli.

Portrayed by Levan Gelbakhiani, Merab is "thrown into an emotional storm of both strong desire and jealousy for his new companion" (Carl International Film Festival), with the encounter between the two male performers unfolding in the conservative dance company.

The film will be shown between November 8 and 10 in Tbilisi and Batumi. All tickets have already sold out.