The Georgian Foreign Ministry condemns the continued erection of barbed wire fences and other artificial barriers in the village of Atotsi in Kareli Municipality, near the occupied Tskhinvali (South Ossetia) region.

Against the background of the extremely aggravated circumstances on the ground, the above actions of the occupation forces represent a deliberate provocation that aims at destabilizing the situation in the country”, the Foreign Ministry stated today.

It further noted that this illegal attempt of escalating the situation further deteriorates already difficult security and human rights situation on the ground as well as restricts freedom of movement and access of the local population to the agricultural lands.

The Ministry of Foreign Affairs calls upon the Russian Federation to immediately cease its destructive actions, allow freedom of movement of the local population and fulfil the undertaken international commitments”, the statement reads.

The Foreign Ministry has immediately informed its international partners regarding the illegal developments in the village of Atotsi to take all necessary measures in order to avoid the provocations on the ground. 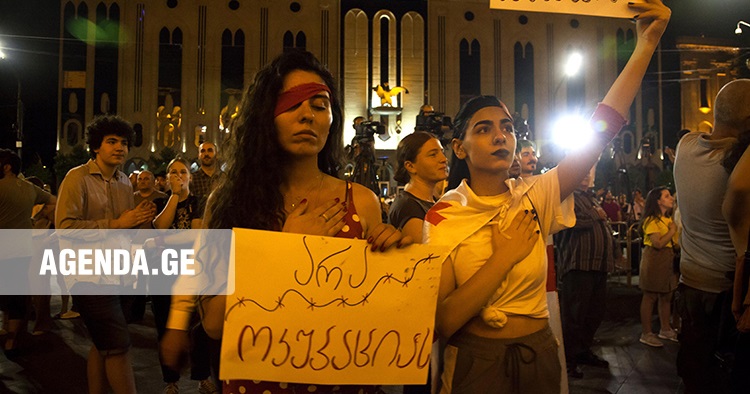 A young demonstrator is holding a postcard, which reads 'No to occupation' during Tbilisi protests in front of the parliament building in Tbilisi. Photo: Nino Alavidze/Agenda.ge

The co-chairs of the Geneva International Discussions as well as the EU Monitoring mission is aware of the situation. The hotline has been activated. The diplomatic corps accredited in Georgia will be also informed.

The State Secretary Service of Georgia also reported today that the Russian occupation forces' continued provocations along the occupation line.