Rustavi 2 leadership has distanced itself from the statement, saying that they did not know about Gabunia’s intention.

Expressing a view in the way Gabunia did is absolutely unacceptable,” Rustavi 2 Director Nika Gvaramia said.

Georgian Prime Minister Mamuka Bakhtadze stated that the television message was a provocation “containing the greatest threat to peace and security of Georgia.”

What we have observed today on Rustavi 2 is nothing but a disgusting act of provocation and an attempt to destabilize our country. [This] is totally unacceptable!

Georgian President Salome Zurabishvili stated that the step taken by Gabunia carried threats to the country’s stability and security.

Georgia’s President unequivocally condemns hate speech, verbal aggression, insults and provacatory statements made today on @Rustavi2tv. They go against all Georgian traditions, serve only to divide and raise tensions in the country, with Russia and in the region.

Members of the opposition also disliked the statement.

However, member of the European Georgia opposition Sergi Kapanadze said that “cursing Rustavi 2 and calling it pro-Russian for Gabunia’s behavior is also wrong.”

The Georgian Charter of Journalistic Ethics says that the statement Gabunia made “harms both Rustavi 2 and the Georgian media,” decreases trust and respect to media outlets. 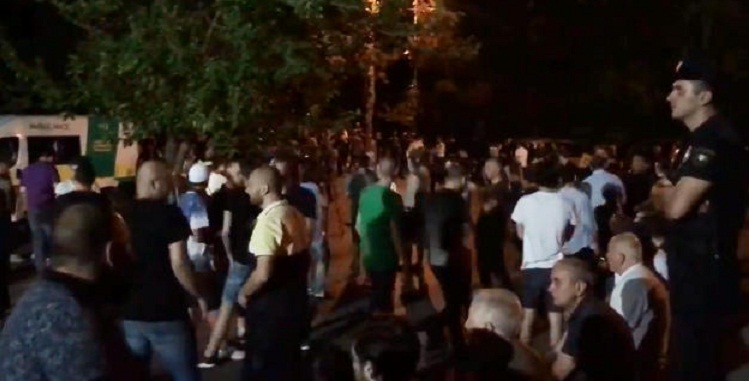 Part of the protests, who are now at the building of Rustavi 2, have thrown eggs to the building. Photo: IPN.

People are now gathering in front of the Rustavi 2 building, saying that the channel “unleashed war against state and created threats to the safety of each Georgian citizen.”

Gabunia’s statement comes amid street rallies in Georgia, which were sparked by the presence of Russian MPs in Georgia and an address of one of them from the seat of the Georgian parliamentary speaker on June 20.