Public activists and the opposition came with car horns at the administration building of the government on Georgia earlier today to demand the authorities dismiss Interior Minister Giorgi Gakharia.

We have heard that the Prime Minister thanked Gakharia for the dispersal of the June 20 rally. We have come here to show the government that it is the people who make the decision on who will be in the building tomorrow,” Giga Makarashvili, one of the activists told the media.

Organisers of the Tbilisi protests, which were sparked by the presence of Russian MPs in the Georgian parliament on June 20, say that provocations might be staged during the rallies and they urged the police to ensure the safety of peaceful protests.

The demonstrators stayed shortly and then they left the nearby street of the government headquarters. Video:Agenda.ge.

The Georgian Dream government has already met two demands of the opposition – the resignation of Parliament Speaker Irakli Kobakhidze and the holding of the upcoming parliamentary elections with the fully proportional vote.

The third demand is the resignation of Gakharia, whom they blame for the dispersal of the June 20 rally in central Tbilisi, leaving 240 injured and 305 detained.

Georgian Prime Minister Mamuka Bakhtadze accused the United National Movement opposition and ex-President Mikheil Saakashvili of turning the people’s “justified and peaceful protest” into unrest due to their “destructive actions and calls.”

He thanked police earlier today from saving the country from the unrest which could have been caused if the demonstrators managed to storm the parliament building.

Gakharia says that the June 20 rally was peaceful only until 10 p.m., and then the opposition managed to push groups of people attack police “and state institutions.” 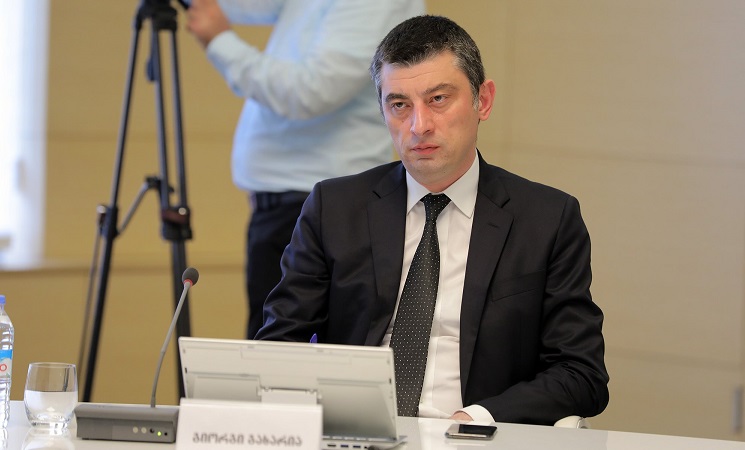 Gakharia says it is easy to resign in the situation. Photo: Prime Minister's press office.

It is not a problem for me to go, resignation is the easiest step I can take… If it is confirmed that police acted unlawfully or the measures taken [again protests] were illegal, I will resign immediately,” Gakharia stated.

Minister of Infrastructure of Georgia Maia Tskhitishvili said that Gakharia must not resign, as police acted in line with the  law.

The issue of [Gahkaria’s] responsibility would only be raised if he had failed to prevent the siege of the parliament”, Tskitishvili said.

Justice Minister Thea Tsulukiani says that Gakharia’s resignation is not on the agenda and the official is not trying to avoid responsibilities.

Tsulukiani said that the investigation is in progress, adding that Gakharia’s resignation is in the interests of those who triggered the unrest.