Georgian Prime Minister Mamuka Bakhtadze says that the “destructive and irresponsible” calls and appeals by the opposition transformed “a peaceful and justified” rally in Tbilisi into unrest on June 20 and the opposition members carry responsibility for that, commenting on recent charges against United National Movement MP Nika Melia.

The developments we saw on Rustaveli came after the provocations of opposition members. Giving a legal assessment is the duty of the Georgian Chief Prosecutor’s Office, which started the investigation. As for the political evaluation, I can once again state, that it was a deliberate provocation by the opposition which caused what we have seen,” Bakhtadze said.

Political Secretary of the Georgian Dream ruling party Irakli Garibashvili said that everyone, no matter their political affinity, will be held accountable if they commit crime and take steps “against statehood.”

Melia was charged yesterday with organising violence by a group, heading the group and participation in the violence during the June 20-21 rallies in Tbilisi by the Georgian Chief Prosecutor’s Office.

The Prosecutor’s Office appealed to the parliament to allow Melia’s detention as he has MP immunity, banning law enforcers from searching or detaining him without a permit from the legislative body.

Melia says that it is political prosecution.

None of the citizen of the country should be charged for protesting occupation and presence of Russian MPs in the Georgian parliament. What is going on in the country is based on the wish of a single person - Bidzina Ivanishvili [s founder of the ruling party]," Melia said.

A joint meeting of Parliament’s Procedural and Legal Issues Committees are being held now to discuss the suspension of MP immunity for Melia, which is strongly opposed by opposition parties.

The opposition says that the evidence sent by the Georgian Chief Prosecutor’s Office is not sufficient for Melia’s detention. 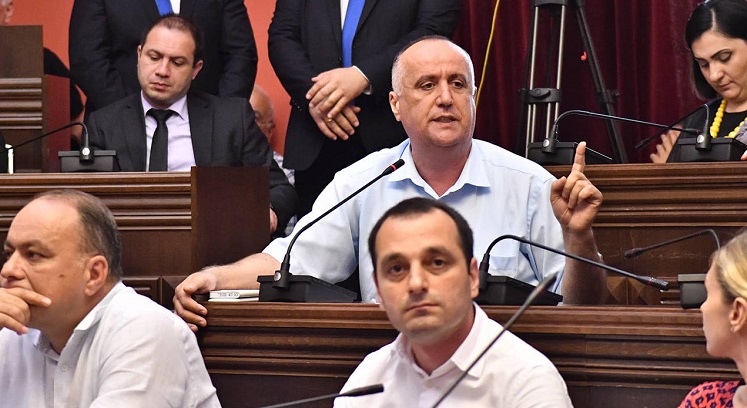 Opposition says that it is the current government's wish to detain Melia. Photo: IPN.

They say that an appeal to parliament to suspend immunity must be the final and not the first step by the Prosecutor’s Office, after the agency will have presented all the materials and evidence providing the possible offence.

The government is in a hurry to detain Melia,” a member of the United National Movement Salome Samadashvili said.

Melia is in parliament now. His lawyers says that he has no intention to hide.