The Georgian Public Defender Nino Lomjaria has nominated Tamar Mearakishvili, a Georgian activist based in the country’s occupied Akhalgori area, for the United Nations Human Rights Prize and Vaclav Havel Human Rights Prize for her "outstanding contribution to defending the rights of conflict-affected population”.

Lomjaria wrote that activist and blogger Mearakishvili has been reporting on the critical human rights situation in the occupied town of Akhalgori and the violation of the rights of local people by the de facto authorities, "at the risk of putting her own life, health and safety in danger”.

A special statement released by the ombudsman reads that according to international organisations, the occupied region of Tskhinvali (South Ossetia) has one of the most critical situations in human rights and security. 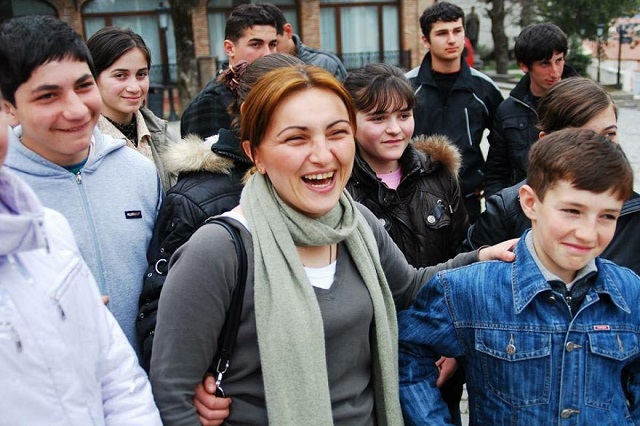 Mearakishvili wrote on her Facebook that she has been in "actual detention" for nine months as the local authorities did not allow her to leave the occupied territory. She asked her facebook friends to accumulate some money for her to cover lawyer's expenses. Photo: Tamar Mearakishvili's facebook page.

Under these conditions, it should be emphasised that despite intimidation, pressure and threats, Mearakishvili has been the only person fighting for the protection of freedom of expression and speech, the right to life and security and many other rights of the Akhalgori population. Mearkishvili's interviews and blogs are the only source of information about the critical situation in Akhalgori.,” the statement reads.

At present, criminal proceedings are underway against her in two separate cases. She has been deprived of her identification documents and despite her severe  health condition she is unable to travel to Tbilisi controlled territory for treatment. I consider that the process against Mearakishvili is an attempt of the de facto authorities to silence her and force her to leave her hometown,” Lomjaria said.

She also urged the Georgian government to pay the utmost attention to Mearakishvili and her family’s social situation and  to protect their rights.

Lomjaria’s statement reads that by  nominating her for the United Nations and Václav Havel Human Rights Prizes, the public defender is expressing her gratitude to Mearakishvili for her contribution to the protection of the rights of the conflict-affected population.