The Georgian Prime Minister Mamuka Bakhtadze has initiated consultations on an agreement which concerns the protection and support of investments between Georgia and Italy.

He said that Georgia has already signed such a document with 34 foreign countries.

Georgia and Italy should start consultations over the agreement as such a deal will further enhance trade relations between the two countries,” Bakhtadze told the

Bakhtadze urged Italian investors to start or expand their businesses in Georgia, as Georgia is turning into a regional hub. 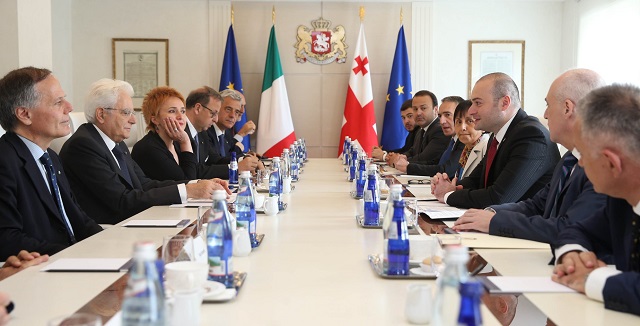 We are carrying out projects which will boost Georgia’s transit role. Investing in Georgia will provide the possibility for investors to further expand and develop their business with regional, South Caucasian and Central Asian countries,” Bakhtadze said.

The PM also said that based on the calculations of international monetary institutions Georgia will be leader in global economic growth.

We are expecting higher than 5 per cent economic growth this year. The forecast of foreign monetary institutions is a signal that the country has the correct economic policy. We aim to further integrate the Georgian economy into the world economy,” Bakhtadze said.

Prior to the business forum Bakhtadze  met Mattarella, where the latter stated that Georgia and Italy had excellent cultural ties and had high potential for higher-level trade economic cooperation.

Mattarella stated that he was "very glad” to have become the first Italian president to visit independent Georgia.

Bakhtadze thanked Mattarella for the "historic visit” and praised the dynamics of Georgian-Italian bilateral  cooperation.