President of Georgia Giorgi Margvelashvili has asked the parliament to simplify the dual citizenship procedure and make it more liberal in the country’s legislation.

Giorgi Margvelashvili spoke about the issue while delivering a keynote address at the forum devoted to Diaspora Day held in Tbilisi today attended by the representatives of Georgian Diaspora.

"The Georgian parliament is working on dual citizenship legislation currently and I would welcome if it will be approved as soon as possible,” Giorgi Margvelashvili said explaining that the current procedures needed for becoming a dual citizen makes the process slower.

"I would be glad if the approach would be more liberal, and the procedures become simpler," Gerogian president said.

On the other hand, the Speaker of the Georgian Parliament Irakli Kobakhidze said that Georgia needs to find a new form through which Georgian people living abroad will have more possibilities to be involved in the legislative process of the country. 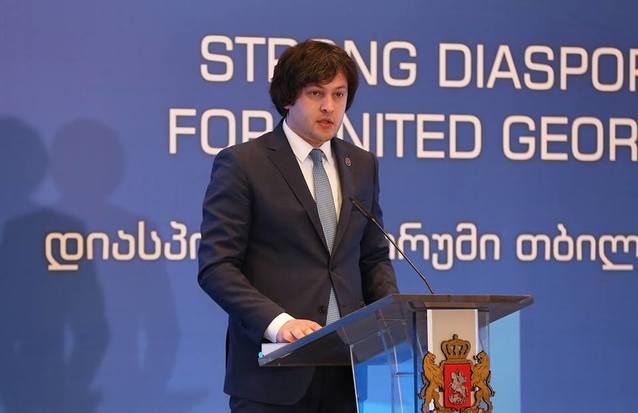 Speaker of the Georgian Parliament Irakli Kobakhidze spoke about the draft laws currently being discussed at the legislative body which are going to increase engagement of Georgians living abroad.

"The Georgian Diaspora has very important significance for our country since they have a great contribution in our country’s economic development and what is more important, in the success of the people’s diplomacy,” Irakli Kobakhidze said while speaking at the forum.

As he explained, in the framework of the constitutional reform carried out recently, the record restricting the dual citizenship has been abolished since it was creating problems for Georgians living abroad. Accordingly, even if Georgians will receive the citizenship of other countries they will be still able to maintain Georgian citizenship at the same time.

"Currently we are working on a draft law which will appropriately specify this constitutional record,” Kobakhidze explained adding that another draft law about the higher education discussed currently by the Georgian parliament envisages financing the study in Georgia for Georgians living abroad and carrying the citizenship of another country.

„This year, first time during the history of Georgian constitutionalism, the government has taken responsibility to ensure that Georgians living abroad keep ties with their homeland. We have a constant relations with several of our diaspora organisations. Our major goal is Georgia to become a country where each of us will have a possibility to realise their talents and knowledge,” Prime Minister of Georgia Giorgi Kvirikashvili addressed the representatives of diaspora at the forum.

He spoke about the ongoing programs that are aimed at development of diaspora relations including the youth initiative Camp of Future, Youth Ambassadors program being implemented in 16 countries, as well as the several initiatives of teaching Georgian language in different countries.