Vine-themed Georgian 5 GEL coins will be released in July

With these new 5 GEL coins Georgia will participate at this year’s prestigious wine festival at Bordeaux Centre for Wine and Civilisations in France, where Georgia will be among the special guests of the event.

The National Bank of Georgia (NBG) came up with the idea to release vine-themed new coins especially for this event, where Georgia will promote its viticulture and wine history. 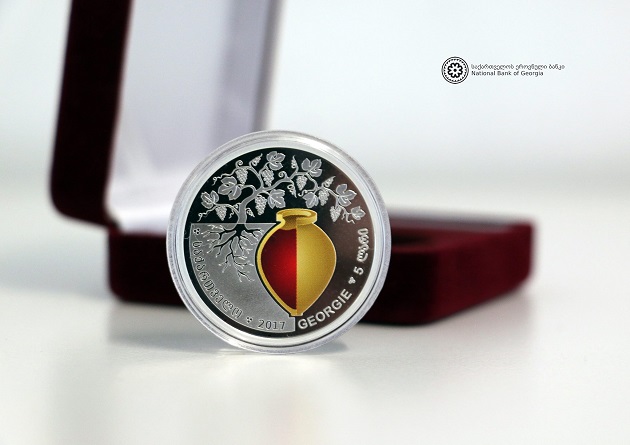 Japan Mint, a government-administered organisation responsible for producing and circulating Japanese coins, will produce Georgian coins that will be released in July of this year.

In total 1,500 coins will be released, which will be sold at the NBG and at the Wine Museum of Kvareli, in Georgia’s wine-region of Kakheti.

The main composition of the coin will be the golden qvevri and dark red wine within it. On the same side of the coin there will be pictured vines with roots, leafs and grapes. On the bottom of the coin will be written: "áƒ¡áƒáƒ¥áƒáƒ áƒ—áƒ•áƒ”áƒšáƒ", "2017", "GEORGIE", "5 áƒšáƒáƒ áƒ˜". (Ge. Georgia...5 lari).

On the other side of the coin the Bordeaux-based wine museum and cultural centre will be pictured. The shape of the building is said to symbolise the spiral flow of wine swirling in a glass.

The script on the other side of the coin will be: "L’EXPOSITION "VIGNOBLE INVITE" DE LA CITE DU VIN DE BORDEAUX", "LA GEORGIE - PREMIER INVITE".

The designer of the new coins is Nino Gongadze.