Jean-Claude Juncker: Visa waiver success for both Georgia and EU

President of the European Commission Jean-Claude Juncker says that March 28 was a great success for both Georgia and the European Union (EU).

Juncker met with Georgian Prime Minister Giorgi Kvirikashvili in Brussels last night as part of the first visa-free journey of a Georgian delegation to the Schengen Zone.

Juncker believes that the successful visa liberalisation was the result of joint efforts from both Georgia and the European Union.

"Mister Prime Minister, welcome to Brussels on this historic day for the people of Georgia and the European Union. Georgian citizens can now enter the European Union visa-free for 90 days within a 180-day period, whether it be for tourism, family visit, or business. This was made possible thanks to the ambitious and complex reform path undertaken by the Georgian Government and the Georgian people," Juncker told Kvirikashvili as the pair spoke at a joint press conference.

Kvirikashvili referred to the launch of visa-free travel as a very important event for Georgians, including those in the occupied territories, and he hoped that the EU visa waiver would bring about tangible results and strengthen relationships. 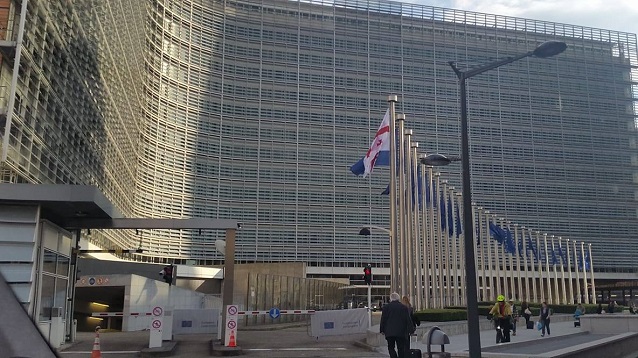 Georgian flag was flying in front of the European Commission building in celebration of the EU visa waiver for Georgia yesterday. Photo by Nino Alavidze/Agenda.ge

Other topic discussed at yesterday’s meeting included the implementation of the EU-Georgia Association Agreement (AA) and an economic cooperation deal within the AA, called Deep and Comprehensive Free Trade Area (DCFTA).

Kvirikashvili said that the AA is the main guiding legal framework that paves the way toward ever-closer relations with the EU, and its full application is a top priority of the Georgian government.

"We are further exploring the DCFTA opportunities to make Georgian products compatible and achieve more market openings; by introducing EU norms and standards we are increasing Georgia's attractiveness for foreign investments. The visa liberalisation is one of key instruments for expanding business links,” he said.

The regulation lifting visa requirements for Georgian citizens to most of the European countries came into force yesterday. In celebration of this historic day for Georgia, Prime Minister Kvirikashvili travelled to the Greek capital of Athens and the Belgian capital of Brussels together with successful Georgian students and scholars. This marked the first flight from Georgia to the EU whose passengers did not have to have EU visas in their passports.