The President of the European Commission Jean-Claude Juncker arrived to Georgia today to participate in the celebrations of the centennial of country’s first Democratic Republic on May 26.

This Juncker’s first visit to Georgia and he was invited by Prime Minister Giorgi Kvirikashvili.

Tomorrow Juncker will deliver a speech at the main spot for the celebrations, Freedom Square. He will also take part in an economic forum and discussion panel in the Parliament of Georgia named ‘Collaboration for prosperity, Strategy for the next century’.

This visit is a clear message of support for Georgia’s European integration. Besides the celebrations, official meetings are planned during which the dynamic of EU-Georgia relations and the next steps will be discussed,” announced Georgia’s Deputy Foreign Minister Vakhtang Makharoblishvili. 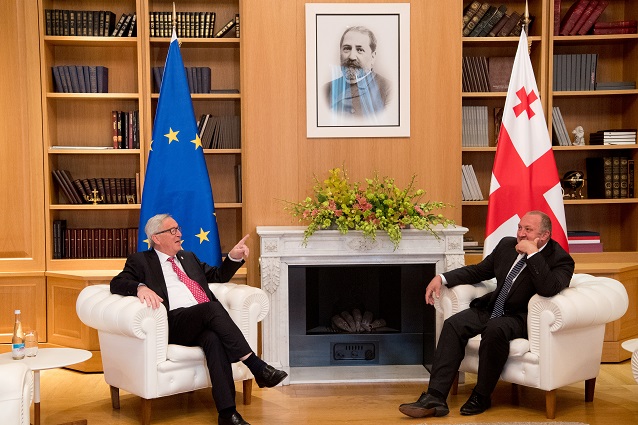 The meeting of Jean-Claude Juncker and Giorgi Margvelashvili held at the Presidential Palace in Tbilisi. Photo: European Union/ Etienne Ansotte.

The first meeting was held with the President of Georgia Giorgi Margvelashvili. The topics of discussion included the new format of higher level EU-Georgia collaboration, agreed upon during the past visit of Margvelashvili to Brussels in March; the situation in Georgia’s occupied regions; the murder of Archil Tatunashvili in Tskhinvali region ( South Ossetia), the violation of human rights and kidnappings of locals in these regions.

Margvelashvili underlined the crucial role of the European Union in the peaceful resolution of Russia-Georgia conflict, emphasised on the importance of the presence of the EU Monitoring mission (EUMM) in occupied regions. Despite the fact that the EUMM has a mandate to observe the situation all around Georgia, the de facto administrations of Abkhazia and Tskhinvali (South Ossetia) do not allow them to enter the territory of the occupied regions.