The Baku-Tbilisi-Kars Railway, an important section in the middle of the modern Silk Road, will soon be fully commissioned, increasing connectivity among Azerbaijan, Georgia and Turkey.

We have great expectations for the results of what the Baku-Tbilisi-Kars railway will bring not only to Georgia, Turkey and Azerbaijan, but also to other countries of the region. I hope that this important project will become fully operational very soon”, said Georgia’s Economy Minister Giorgi Gakharia while visiting Turkey today.

Gakharia together with the Minister of Transport, Maritime and Communication of Turkey, Ahmet Arslan, travelled by the first train from Kars to the Georgian-Turkish border on the new railway section which was built specially for the Baku-Tbilisi-Kars project.

The two ministers talked about the project development process and emphasized the economic benefits the project will bring the two countries while travelling with the modernised train. 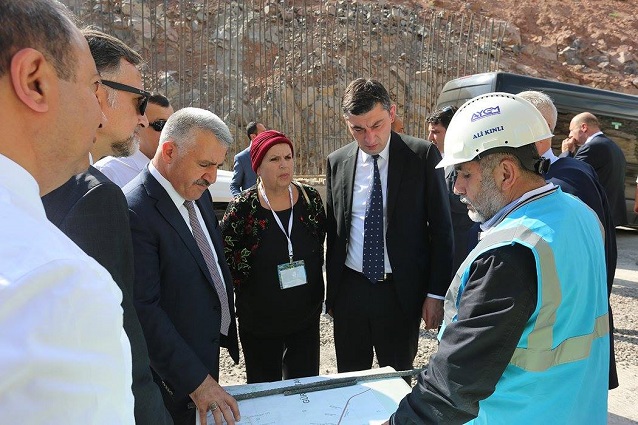 Georgia's Economy Minister Giorgi Gakharia and the Minister of Transport, Maritime and Communication of Turkey, Ahmet Arslan discussing the development process of the Baku-Tbilisi-Kars Railway project. Photo by Georgia's Ministry of Economy.

This is a historic project and together we are part of this historical fact when we take the first train on this newest railway line. This project is very important for all three countries as thanks to it we will be able to further develop economic and cultural relations,” said Arslan.

I remind you that at the first stage the project was started by Azerbaijan, Georgia and Turkey, but now Kazakhstan and Turkmenistan are also joining the project,” he added.

Ten years ago high-ranking officials from Azerbaijan, Georgia and Turkey agreed to jointly implement the railway project to facilitate transportation of passengers and goods, principally oil.

The project to connect Baku with Kars via Georgia’s capital of Tbilisi by rail launched in 2007 and construction began in 2008.

Once the railway will be fully operational, all three countries will mutually benefit from improved trade and economic relations and gain additional Foreign Direct Investments (FDI) through the new railway connecting Europe and Asia.