Baku-Tbilisi-Kars railway will be fully operational in 2017

The Baku-Tbilisi-Kars project, which facilitates the transport of passengers and goods between Azerbaijan, Georgia and Turkey, will be fully commissioned at the beginning of 2017.

The seventh session was held in Georgia’s capital Tbilisi.

Georgia has already built its section of the $775 million railway line and began testing passenger and cargo trains last year.

Now Azerbaijan and Turkey must complete construction on their respective sections. 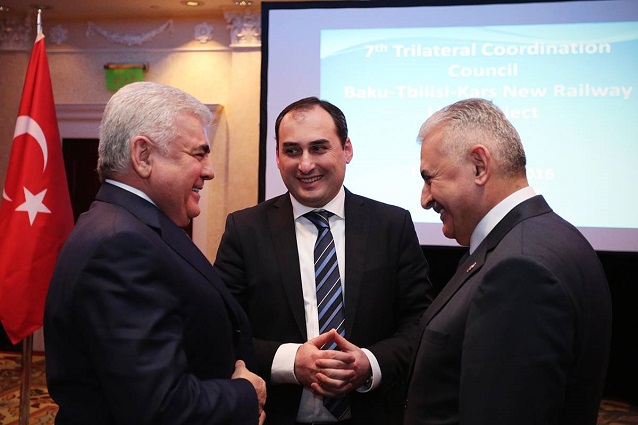 Tbilisi hosted the trilateral session of the Coordination Council on the Baku-Tbilisi-Kars railway project today. Photo by Georgia's Ministry of Economy.

He added the overall cost of the Baku-Tbilisi-Kars project was expected to increase about $150-$170 million above the estimated $775 million total cost.

Materials have gone up in price following global economic changes. The issue of cost will be studied and the results will be submitted to the [Azerbaijani] government,” he said.

Meanwhile Turkey’s Minister of Transport, Maritime and Communication Binali YÄ±ldÄ±rÄ±m promised his country would fully complete the construction on its railway section by the end of 2016.

Ten years ago high officials from Azerbaijan, Georgia and Turkey agreed to jointly implement the railway project to facilitate transportation of passengers and goods, principally oil.

The project to connect Baku with Kars via Georgia’s capital Tbilisi by rail launched in 2007 and construction began in 2008.

Once the railway was fully operational, all three countries will mutually benefit from improved trade and economic relations and gain additional Foreign Direct Investments (FDI) through the new railway connecting Europe and Asia.