Thousands of extra beds ranging from five-star hotels to more intimate experiences at local guesthouses are coming to Georgia, giving tourists more choice about where they stay.

Georgia is currently experiencing a building boom of new hotels and guesthouses, which is giving rise to hundreds of new hotels in the country.

At least 60 new hotels, with 3,800 rooms collectively, are currently under construction in Georgia as developers boost investments to match surging demand.

The boom comes of a successful year last year, where 172 hotels were built in Georgia.

Official statistics from the National Statistics Office of Georgia (Geostat) show there are now 1,225 hotels and 48,457 beds available for tourists in the country.

Last year 23,100 rooms were added to Georgia’s hospitality sector. Of this:

Georgia’s Economy Minister Dimitry Kumsishvili said 508 hotels opened in Georgia within the last three years, which was 58 percent more than the number of hotels open to tourists before 2013.

Half of the hotels that are now available in Georgia were created during our Government’s term because we created such special investment conditions that allowed investors to implement their projects easily,” said Kumsishvili.

Almost all hotels operating in Georgia (99.3 percent) are privately owned and only 0.7 are owned by the state.

Meanwhile about 10 percent of the privately-owned hotels are owned and operated by foreigners, meaning the majority are owned by Georgian locals.

How many tourists stayed in Georgia last year?

Last year hotels and other accommodation facilities in Georgia welcomed 1,854,507 guests. This was 33 percent more year-on-year (y/y). The majority of guests (63 percent) were foreigners and 37 percent were locals. 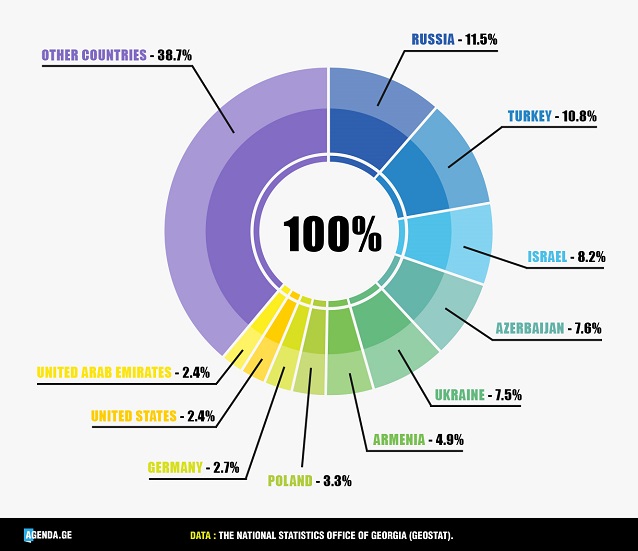 This graphic shows the top 10 countries where Georgia's hotel guests came from in 2015. Graphic image by Mariam Chalauri/Agenda.ge.

Why do travellers stay at hotels in Georgia?

The most common reason why people stayed at a hotel in Georgia was for recreation and holiday (64.1 percent), business or professional (22 percent), medical treatment (12.5 percent) or other (1.5 percent).

Where are Georgia’s visitors coming from and what are the reasons reason for their visit? Figures from 2015 showed:

From EU countries: 178,382 people from the European Union (EU) spent time in hotels in Georgia.

From CIS countries: 404,481 people from countries in the Commonwealth of Independent States (CIS) stayed in hotels in Georgia last year.