Georgia’s Economy Minister Dimitry Kumsishvili took Sheikh Nahyan to Gonio’s former military range and told him of the investment potential of the area.

Arab investors have already heavily invested in Georgia, including Dhabi Group who pumped $140 million USD into the new Biltmore Hotel Tbilisi, which officially opened in Tbilisi on Sunday night.

Sheikh Nahyan, who is also head of the UAE’s Ministry of Culture, Youth and Social Development, confirmed the UAE would continue investing in various sectors of Georgia to support the country’s democratic development.

We saw land that is suitable not only for real estate but it could also be used for various purposes such as establishing recreation, trade, financial and sport centres. We will continue investing in this country,” said the Sheikh.

We believe in Georgia’s future welfare and we believe in giving opportunities to the great Georgian people and this country itself. Georgians are friendly and hospitable people who create an attractive atmosphere for tourists,” he added.

Sheikh Nahyan spoke fondly of the Georgia’s iconic seaside city Batumi and said the fast development of Batumi made a big impression on him. 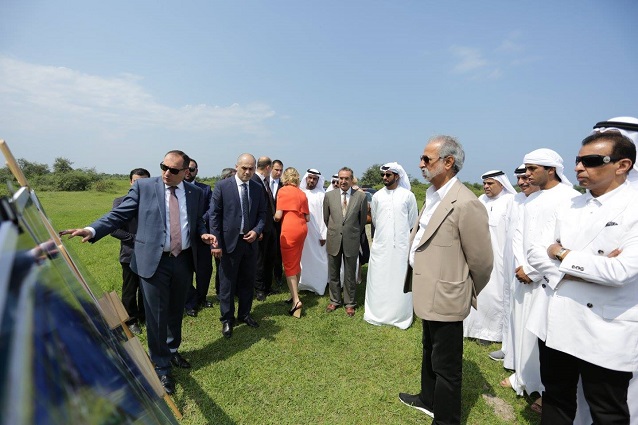 Georgia's Economy Minister Dimitry Kumsishvili presented a $3b investment project to the Sheikh. Photo by Georgia's Ministry of Economy.

"Batumi is becoming the region’s touristic centre. And in general Georgia has become a hub for tourism and business. Here is a friendly environment with loyal legislative regulations which encourages people to come and invest here,” said the Arab high official.

Furthermore, the Sheikh and one of his Arab investor friends was interested in putting money towards developing Georgia’s educational and real estate directions. He said investors were attracted by the safety of Georgia and its safe legislative system.

The Sheikh and other Arab investors came to Georgia to officially open the new Biltmore Hotel Tbilisi on Rusavelo Ave in Georgia’s capital, which was built using Arab investments.

In the past few days the Sheikh visited other regions of Georgia to explore the investment opportunities.