Georgia’s First Vice President, Economy Minister Dimitry Kumsishvili believes it take about two weeks to rebuild a section of road that was swept away by a mud flow in northern Georgia yesterday.

This morning Kumsishvili told journalists the state budget would fund the road restoration using special funds put aside specifically for the recovery and management from natural disasters.

The resources are mobilised. Our state budget involves finances associated with handling a disaster,” the Minister said.

Judging by last night’s information, it will take us about 10 days or two weeks to reconstruct the road section that has been swept away.”

A landslide fell in Devdoraki Gorge in northern Georgia and blocked the road and a checkpoint at the Georgia-Russia border yesterday evening.

Experts from the National Agency of Environment of Georgia carried out a control flight in the area and said suggested a possible cause of the disaster. 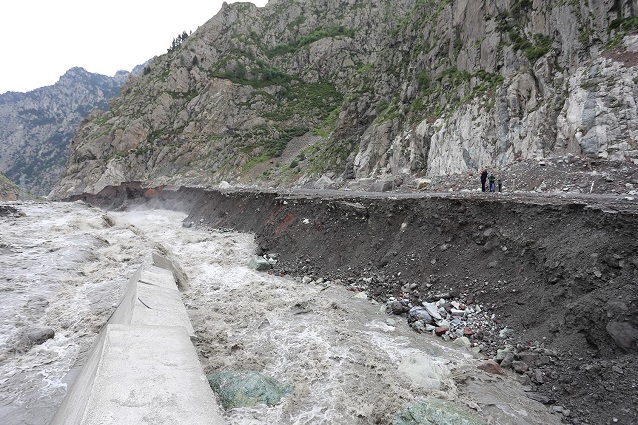 Geologists said due recent heavy rains, a solid mass of land that had settled in Devdoraki River following a major landslide in 2014 became unstable and started moving. It reached the area where Devdoraki River joined Tergi River and blocked the river.

This caused Tergi River to back up and forge a new route, which completely swept away an 800m section of the Mtskheta-Stepantsminda-Larsi Rd (Georgian Military Highway) near the Devdoraki glacier.

Georgia’s Road Department said all vehicles were banned from moving along the 134-135km section of this road. This meant the only road linking Georgia and Russia was temporarily closed.

The Road Department also said it was now waiting for permission from the National Agency of Environment to begin works to reconstruct the damaged road. 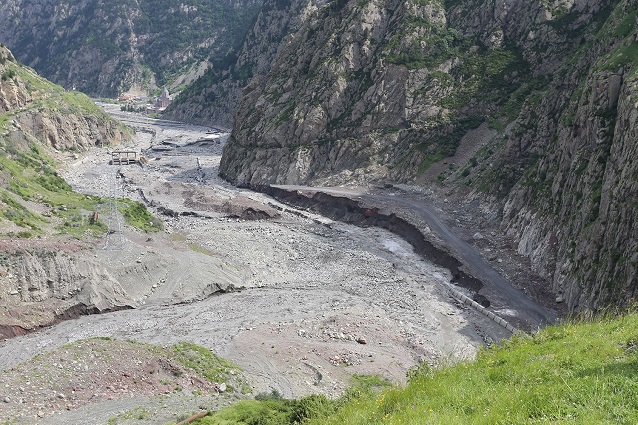 Early warning systems were in place and sounded an alarm immediate before and during the disaster. This early detection meant the National Agency of Environment was able to send immediate emergency signals to other state agencies about the impending landslide shortly before it hit, and to quickly evacuate people from the danger area.

About 200 people were evacuated yesterday and earlier today.

Surges in Devdoraki glacier have led to catastrophic mudflows in the Dariali Gorge, which have on several occasions damaged the Georgian Military Highway.

Massive collapses of the glacier in spring and summer of 2014 led to the death of at least seven people.