The floor has been laid, the sound system has been tested and the stage is set for famous British pop star Robbie Williams to perform in Georgia’s capital Tbilisi tonight.

Williams will take to the stage in front of a sold-out crowd of 38,000 people at Dinamo Arena, which has been transformed from a sports stadium into a concert venue for tonight’s show.

Organiser said Williams will perform his popular hit songs in a "grand show" at the stadium.

Williams is one of four headline acts within the Check in Georgia program that encompasses more than 30 cultural and entertainment events hosted by Georgia throughout the year. 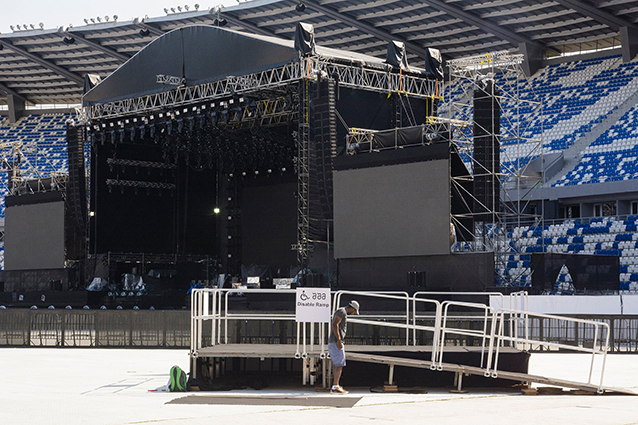 A ramp has been set up for disabled people attending tonight’s concert at Dinamo Arena. Photo by Gela Bedianashvili/Check in Georgia/Facebook.

Williams arrived in Tbilisi overnight on Wednesday, with his concert coinciding with national celebrations on May 26 marking Independence Day in Georgia.

The British singer shared his thoughts about his Tbilisi performance to his social media followers on Twitter on Thursday:

Williams and his support team did a sound check at Dinamo Arena on Thursday night while today workers spent the day completing final preparations for tonight’s show.

Photos released by Check in Georgia show the stage set up and ready to go, and separate areas for ticketholders, as well as a special area for disabled people.

Gates will open at 5pm tonight however the concert is not expected to begin for some time after that. Groovesonix will be support act for Williams.