Honey is fast becoming a desired agriculture product in countries throughout the European Union (EU), and Georgia is about to get on this bandwagon.

The EU imposes high sanitary requirements to all products of animal origin before importing [into the EU]. … Before, importing Georgian honey to the EU markets was not allowed however today we have achieved very big success in this direction,” said Herman.

This is the sweetest news I have ever announced.”

The EU envoy noted the Directorate General for Health and Consumers Affairs of the European Commission praised the last two year’s activities of the National Food Agency of Georgia regarding controlling the quality of Georgia-made honey.

In particular the EU side recognised the Laboratory of the Ministry of Agriculture of Georgia (LMA), which was established in September 2015 to examine the quality of locally produced honey to ensure it met high EU standards.

After the LMA was established, the Directorate General for Health and Consumers Affairs addressed the European Commission to include Georgia in the list of "third countries” and allow Georgian honey to be imported to the EU. 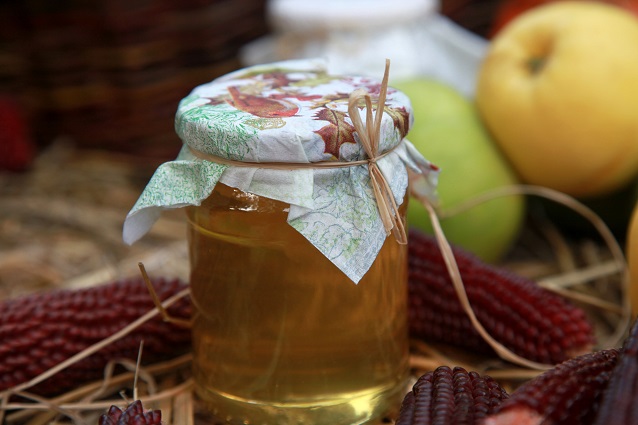 Georgia produced about 4,000 tonnes of honey in 2015 year. Photo by N. Alavidze/Agenda.ge.

A spokesperson from Georgia’s Ministry of Agriculture told Agenda.ge Georgia will begin exporting honey to the EU this year.

The spokesperson said all honey producers were eligible to export honey to the EU only once their products gained positive results after laboratory testing.

Georgian honey will have a special Georgian certificate that will be recognised internationally.

The process of reviving the flailing art of Georgian beekeeping started about two years ago.

The Government initiated a Beekeeping-Agricultural Cooperatives Support Program that supported 164 cooperatives throughout Georgia; 80 of which in Georgia’s mountainous regions, to bring beekeeping back to life.

To do this the Agricultural Cooperatives Development Agency purchased beehives and specialist technical equipment for cooperatives to assist them in their beekeeping duties.

Georgia’s Association Agreement, including the Deep and Comprehensive Free Trade Area (DCFTA) which Georgia signed with the EU in June 2014, stated the country could export 1,500 tonnes of honey to EU markets every year.

Demand for honey in the EU was growing six percent every year. About 55 percent of the honey consumed in Europe, about 150,000 tonnes, was imported from countries outside the EU.

In the past few years, Georgian honey has been exported mainly to Libya, the United Arab Emirates, Saudi Arabia, Iraq and Lebanon. Last year China and the Republic of Korea joined this list.