A second Georgian man has been found dead in the centre of Kiev, where ongoing waves of demonstrators clash with local police in a bloody battle.

The violent conflict in the Maidan, or Independence Square, has claimed the lives of more than a hundred people.

A Georgian man was found dead near the conflict zone with multiple gunshot injuries.

He has been named as 33-year-old Dato Kipiani. His body was found on Khreschatyk St, near the Maidan. He was participating in the protest rallies, which began in November, and was killed after he was shot.

Georgia’s Embassy in Kiev has confirmed the death of Kipiani but said it could not release the cause of death until medical experts had examined the body and completed a report.

"Kipiani suffered two gunshots on the body and died on his way to hospital,” said Georgian Council in Ukraine, Konstantine Sabiashvili, from Kiev.

Kipiani has lived in Kiev for the past year and was a member of Ukraine-based think tank Free Zone. Kipiani is survived by a son and a wife.

Kipiani was also a member of the United National Movement (UNM), a political party lead by the Georgia’s former President Mikheil Saakashvili.

On Facebook, Saakashvili posted a message saying Kipiani was a member of the UNM party "but he was not fighting in Kiev for party or political purposes”.

"In Kiev, Dato was fighting for Ukraine, therefore for Georgia, for Ukraine and Georgia and for freedom,” Saakashvili’s post read.

He is the second Georgian citizen to have died in Kiev recently.

On February 18, Zurab Khurtsia was found dead on Institutskaya St, near Independence Square, which has been ground zero for anti-Government protesters.

Medical experts said the 53-year-old died after suffering from a heart attack. Khurtsia’s body was transported home to Georgia this morning. 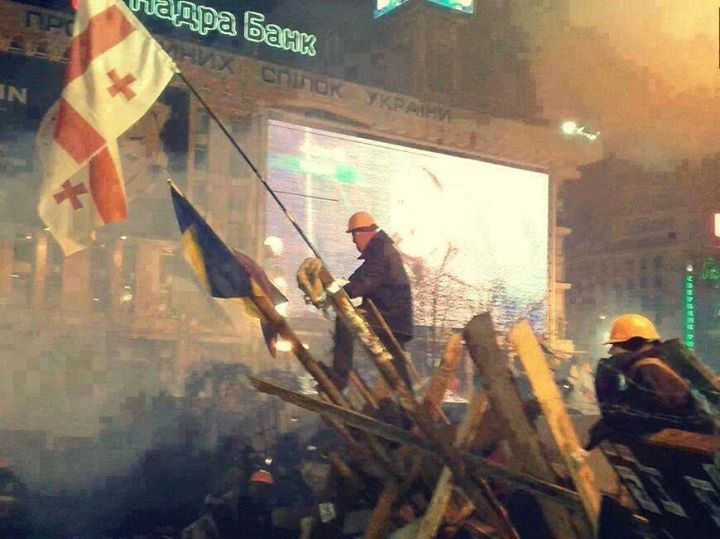 Georgian flag is waving at the Independence Square, the epicenter of the country’s current unrest in Kiev, Ukraine. Photo by Dv0rsky.