New charges have been filed against the country’s former president for organising a vicious attack on Valeri Gelashvili nine years ago.

Criminal charges relating to organising the physical abuse causing injury of Gelashvili, who at the time was an opposition member of Parliament, were filed against ex-president Mikheil Saakashvili today.

The new charges related to the 2005 attack on Gelashvili, who was severely beaten up by masked, armed men in Tbilisi. He suffered many injuries as a result, the Chief Prosecutor’s Office said today, August 5.

The Office also claimed Vano Merabishvili, the then interior minister, will face similar charges in the same case.

Merabishvili and Saakashvili are both facing numerous charges relating to other cases.

Meanwhile in a statement, the Chief Prosecutor’s Office said an investigation into the Gelashvili crime was ongoing under Article 333 of the Criminal Code of Georgia, which related to exceeding official powers. The charge carried a prison sentence from three to eight years.

The Prosecutor’s Office claimed Saakashvili ordered the attack on Gelashvili after he gave an interview with local newspaper Resonansi on June 29, 2005, where he made comments about the personal life and construction of residence of the then President.

He also accused the former president of unlawfully confiscating his property without compensation.

In retaliation to the interview, Saakashvili was accused of ordering the attack on the MP.

According to the investigation, Saakashvili commissioned the then minister of defence Irakli Okruashvili to physically abuse Gelashvili however Okruashvili refused to comply with the order.

The Office claimed Saakashvili then instructed Merabishvili to physically assault Gelashvili. Merabishvili accepted the offer and together with Erekle Kodua, who was head of the Special Operative Department subordinated to the Minister of Interior Affairs, carried out the attack on Gelashvili on July 14, 2005, the Office claimed. 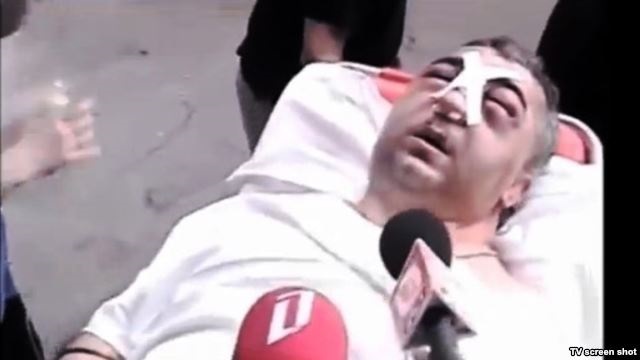 "In particular, Gelashvili was driving his vehicle [near] Mirtskhulava Street in Tbilisi, when the operative officers of the Special Operative Department together with the armed Special Task Force officers blocked Gelashvili’s vehicle and attacked [him] and his [passengers]. Upon Kodua’s instruction and under the guidance of Giorgi Siradze, the head of the unit at the Special Operative Department, the then Special Task Force officers forced Valeri Gelashvili and his accompanies out of their car under gun threat. Valeri Gelashvili was further forced to the ground and severely beaten up with firearm butts,” The Prosecutor’s Office said.

Below the video of MP Valeri Gelashvili after attack on July 14, 2005.

The Chief Prosecutors’ Office began criminal proceedings against Kodua and Siradze in April 2014.

Initially, the investigation into the attack on Gelashvili was launched on July 14, 2005.

The Prosecutor’s Office claimed no effective investigative actions had been carried out during initial investigation with the view of establishing the objective truth in this case. Gelashvili is currently a lawmaker from ruling Georgian Dream (GD) parliamentary majority group.

The case remained unsolved until the investigation resumed in 2013. The Office said they fully investigated the case and had charged former high officials Saakashvili, Merabishvili, Kodua and Siradze for their involvement in the crime.