Within the walls of massive Messe halls dotting the central downtown, design studios, aspiring professionals, customers and the media congregated to the 2020 edition of the exposition that opens its doors to around 4,500 exhibitors from more than 90 countries annually.

While the former was centred around HoReCa (hotel, restaurant, cafe) industry, kitchen ideas and related products, the Living and Giving themes of the show were about everything from living room furniture to handcrafted decorative objects and ideas for presents. Our lens were mostly focused on the latter two categories for the 2020 fair. 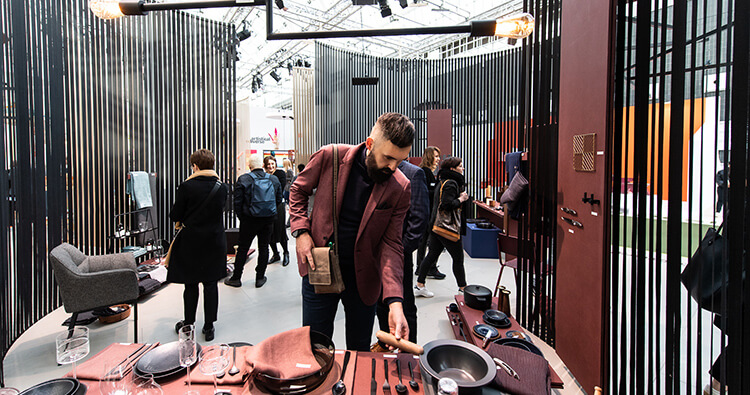 A recurring theme throughout designs and their application found at the fair was sustainability - from biodegradable material to reusable objects, exhibitors brought their creations with ecological attitude in mind.

Looking to cover the massive fair and its creatives we selected highlights from the show - from up-and-coming design students to established brand names and companies bringing novel approaches to existing conventions.

While origins of inspiration for involved designers and their visions for products varied, what we saw at Ambiente was summed up by professor Mark Braun, of Berlin-based Studio Mark Braun, as “beauty meets relevance”.

A notable spot in the Living & Giving expos of Ambiente was taken up by young creatives of German Design Graduates, a platform introducing and supporting emerging professionals.

Marie Radke and Jonna Breitenhuber of the University of the Arts in Berlin, as well as Karlsruhe-based Shanmei Yao, represented the platform at this year’s edition in person, while information on works by a myriad of other graduates could also be found at the GDG stand. 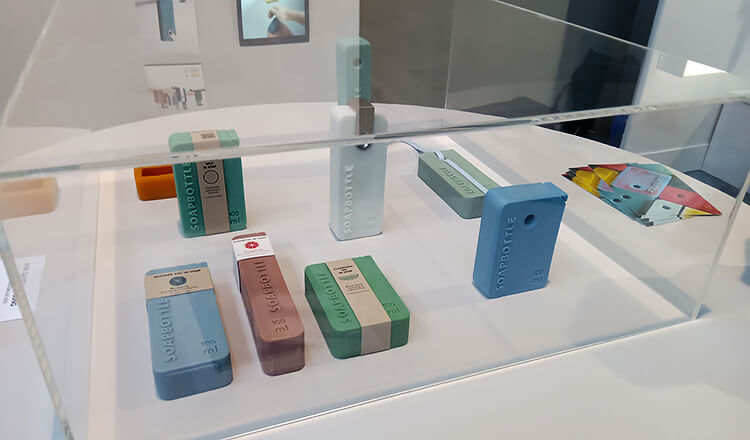 At her own corner of the show, Breitenhuber was presenting Soapbottle - her approach to sustainable packaging. Working as a vessel for liquid, the bottle itself is made of soap with the quality of being degradable.

Made of natural ingredients, the material of the shell dissolves with usage of the liquid inside. After the latter is used up, the bottle can be used as a soap or detergent.

The young designer said she was inspired to take the food industry’s practice of the product itself being turned into packaging and adapt it to hygiene products.

Working on the idea through her master’s thesis, Breitenhuber saw it as an opportunity to tackle the issue of near-absence of plastic-free packaging for personal care products, an issue for sustainable use.

After experimenting with soap as a packaging material she came up with the bottle with which “waste can be completely avoided”. Users can make sure the Soapbottle dissolves at a measured rate by hanging it in shower, which ensures the package dries efficiently after use.

Another kind of challenge was tackled in exhibited works by Marie Radke, who was also introduced by GDG. The creative was at the fairgrounds with her furniture collection for a more thoughtful but also fun use for worn clothes.

Familie Hempel is a homage to the classic pile of clothes on a chair. A special chair where you put your clothes that are already worn, but are still not ready for the washing machine,” a summary for the products said.

Comprised of a stool, a pouf, a bench and a high-seat, the creations positioned at her stand translated the usually-ignored laundry process into a newly-packaged practicality.

Moving on to established studios and producers of consumer goods for living rooms and decorative home use, visitors could find items from names such as Fundamental and Rohleder on display.

The former, a Berlin-based name working on products “inspired by the mathematics of nature”, had bowls of variable shapes and geometric patterns at their stand.

Titled Gravity Tray, one of their most eye-catching works was “inspired by sci-fi fantasies of bending the space-time continuum”, which enabled users to shape it into various angles through an uncanny approach to how its parts were locked together.

Another of the designers’ brainchild was a flat metal plate, made in Italy of copper, steel, brass and metals, which customers could shape with their own hands into a bowl to be used for storing items like chains or keys.

Cushions in complementing colours and other items for making living rooms both more functional and attractive were on show from textile manufacturers Rohleder.

Bringing “sophisticated upholstery and furnishing fabrics” to the textile market since 1946, their set-up at Ambiente placed side-by-side bedroom products, decorative items and material. 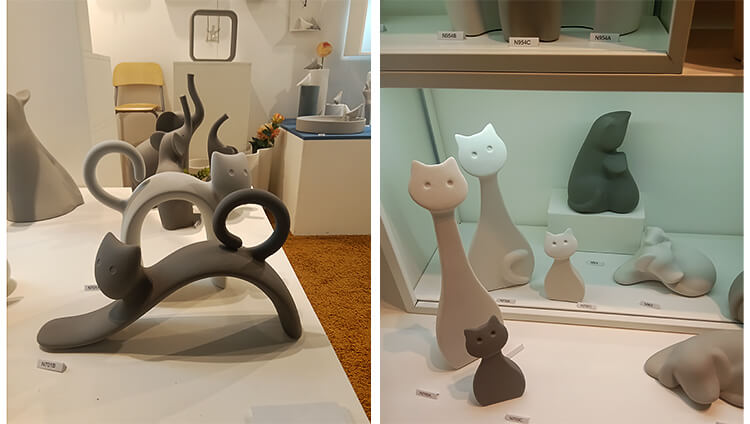 Works by Italian professionals in the Living & Giving section ranged from delicate glass cutlery by Milan-based Dovetusai to minimalistic animal sculptures from porcelain-centred producers of Lineasette.

Stands of the latter featured delicately made figures of pets and wild animals, coloured in neutral hues that easily integrated them into surroundings.

Handmade from a mixture of clay, kaolin and feldspar, the sculptures sought to reflect a creation through natural process and possessed “pure and essential traits” in the eyes of the artisans of the group.

Another example of artisanal quality that caught our eye was a range of lighting figurines from Skitso, a Greek-based group that has been involved in producing lamps and wooden craft items for three decades. 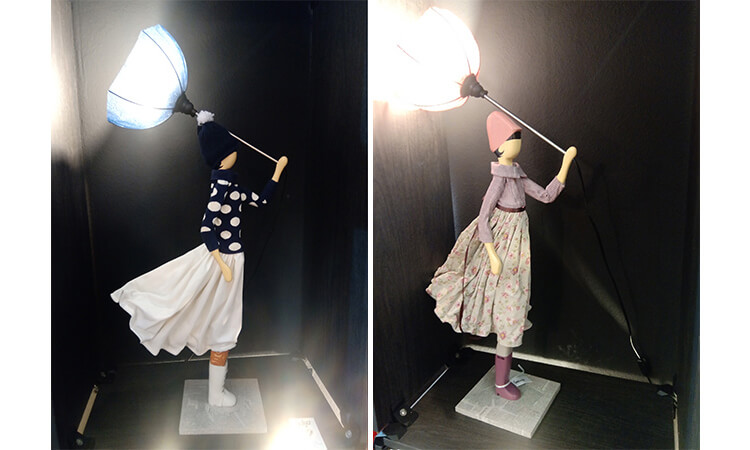 From their shelves, lights descended from figures dressed in detailed dresses, with bulbs hidden in umbrellas or headwear. Skitso articles range from ballet dancers to papier-mâché sculptures.

Again stressing the theme of environmentalism, the company notes its creations are made of “wood, ceramic, fabric, metal and paper” while aiming for original attitude.

If you went to Ambiente looking to find something to use as a practical or decorative vessel at home, add wooden crafts to your table or even entertain yourself with unusual take on classic desk games, you could find all of these in the same halls.

South Korean artist Hojung Kim was easily noticeable among the bustling scenes of the fairgrounds through her take on ceramic objects.

Exploring crossing points between “colours, community and material investigation”, she had a series of takes on contemporary vessels sprinkled with carefully chosen colour sets on the show.

Bearing patterns of manufacture and variable density of colour patch application, Kim caught visitors’ eyes with her cognisant arrangement of the vessels and surroundings, a reflection of her approach of “awareness of the space” for the objects.

Vessels were also mostly the name of the game for Lambert, a multi-dimensional brand promoting itself as a company for “holistic living scenarios”.

Their full-spectrum presentation of varied-material products, from large metallic bowls to smaller wooden- and glass-based containers for daily use.

A taste of famed Japanese design could also be discovered in one of the areas of the Messe where Toyooka Craft and Atelier Takumi had wooden crafts unveiled.

Gift wrappers, Hako storage boxes as well as multi-compartment trays could be found here, for everything from kitchenware to aroma candles.

Faithful to Japanese thought, we like to believe that objects are charged with intentions, and that the story they carry within them is as important as the object itself” - Atelier Takumi

For these works the craftspeople involved in making them refer to their philosophy of striving to “create a bridge between the excellence of Japanese know-how and the French way of life”. 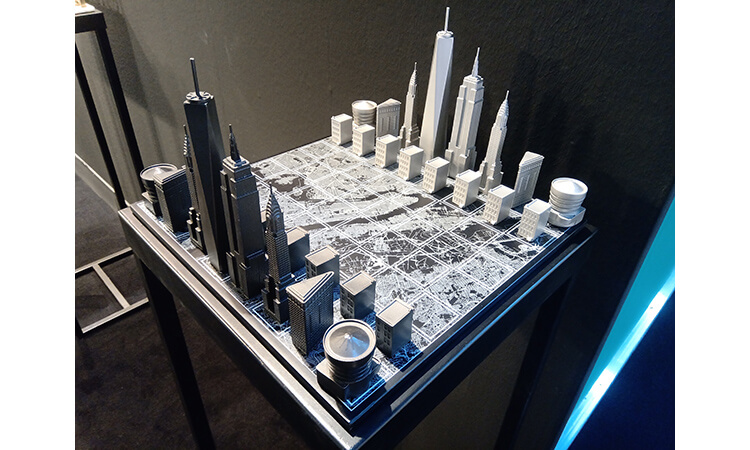 One of the themed editions of Skyline Chess, pitting scale models of some of world’s most recognised buildings against each other in the classic game. Photo: Tornike Khomeriki/agenda.ge.

And if you were looking for a bit of a novel approach to well-known entertainment means, two London-based architects delivered Skyline Chess, an atypical set of the classic game, to the fairgrounds.

From megacity skyscrapers to iconic buildings associated with their locations, the board from the creators was as much a decorative element to a house as a game piece.

Metal, bronze, silver and gold are some of the materials Skyline Chess pieces are made of in special editions themed after locations, distinguishing the work among fair products.

With these and a myriad of other design items, practical products and artisanal accessories, this year’s Ambiente saw hallways packed of both curious individual visitors and industry guests.

Navigating the Messe grounds between February 7-11, aagenda.ge discovered a stellar creativity of craftspeople and producers flocking to the event that is recognised as the most significant for the field.