Georgian Prime Minister Irakli Garibashvili and Philip Reeker, the Senior Adviser of the United States Department of State for Caucasus Negotiations and the Geneva International Discussions, met in Tbilisi on Monday to discuss Russia’s war in Ukraine, regional and global security challenges and the situation in Georgia’s Russian-occupied Abkhazia and Tskhinvali (South Ossetia) regions, the Administration of the Government of Georgia said.

Congratulating Reeker on his recent appointment as the US OSCE Minsk Group Co-Chair and lead negotiator for the US delegation to the Geneva International Discussions - the latter established to address the consequences of the Russia-Georgia 2008 war - the head of the Georgian Government described his country as “a reliable partner and loyal ally of the US in the [South Caucasus] region and beyond”.

Addressing the importance of peace in the region, the officials recalled the June 2021 deal brokered by them, which involved Azerbaijan’s release of 15 Armenian prisoners of war in exchange for getting from Armenia a map of landmines in the Agdam district.

In the agreement, which followed the most recent Azerbaijan-Armenia conflict over the Nagorno Karabakh region, the captives were handed over to Armenia on the Azerbaijani-Georgian border, with the Georgian authorities attending the swap. 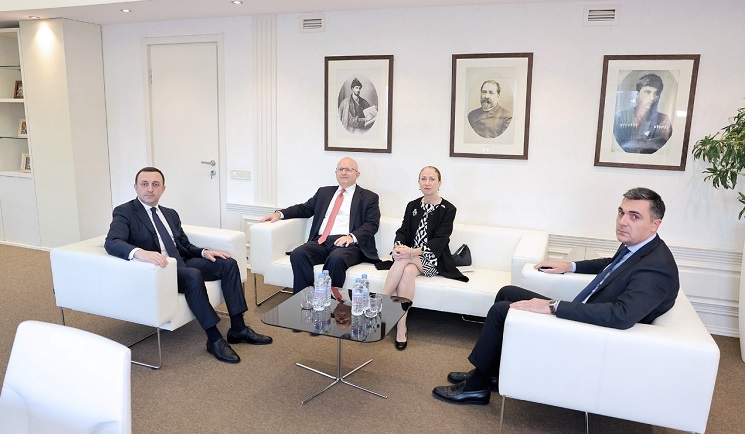 In response to the June decision of the European Council to grant Georgia the European perspective and several months to address 12-point conditions for a membership candidacy, Garibashvili stated that the move  had “confirmed that Georgia’s future is in the EU, and that Georgia remains committed to its European path”.

For his part, Reeker reassured the Prime Minister of the strong support of the United States for Georgia’s territorial integrity and sovereignty.

The meeting at the Administration Building of the Government of Georgia was also attended by US Ambassador to Georgia Kelly Degnan and the Georgian Foreign Minister Ilia Darchiashvili.