The number of individuals receiving a monthly salary higher than ₾9,600 (about $3,310/€3,149) increased by 42 percent in May year-on-year, a report published by PMC Research Centre on Wednesday showed.

A breakdown of vacancies by categories was as follows: 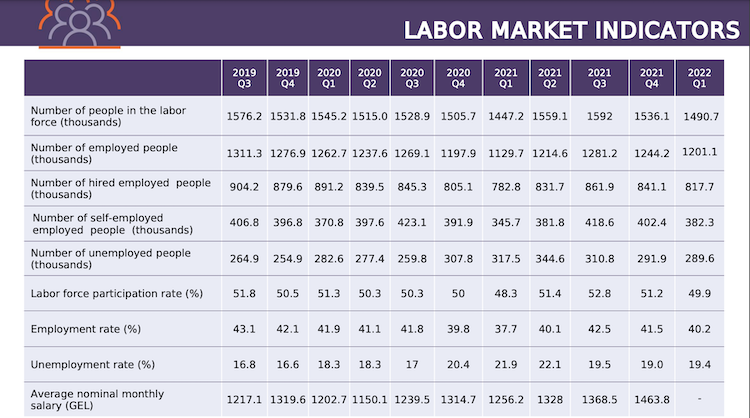 Unemployment rate in Georgia increased by 2.1 percent in 2021 compared to the previous year and reached 20.6 percent across the country, data from the National Statistics Office of Georgia showed.

The highest rate of unemployment was observed in the 15-19 age group (52.2 percent), while the indicator has traditionally been lowest in the 65+ age group (6 percent) due to the “low activity” of the population in this age group, according to Geostat.

In the same quarter, Georgian businesses employed about 673,600 people, an 8.2 percent year-on-year increase. A majority (42.6 percent) worked in large businesses, while 37 percent were employed in small businesses and the remaining 20.5 percent in medium-size enterprises, the statistics office said.

Georgian Prime Minister Irakli Garibashvili told the Parliament on Wednesday 15,000 applicants had already been employed as part of the launch of the new Government-initiated public employment programme that aims to offer jobs to up to 200,000 citizens eventually.

"Unemployment has dropped slightly. Thousands of jobs have been created [and] 35,000 applications have already been submitted. Half of the number are already employed, so we have created almost 15,000 new jobs in just two months. There are good expectations in the private sector [as well] and it needs to be maintained and strengthened", Garibashvili said, adding poverty had “also declined" in Georgia.