Georgian Prime Minister Irakli Garibashvili on Wednesday accused the domestic political opposition of lying with its charge of the “window of opportunity” for Georgia’s European Union membership having been closed following the European Commission’s decision to outline a set of conditions before the candidate status for the country is considered.

Answering questions by Parliament members, Garibashvili stressed the previous Government had not achieved “tangible results” on the country’s Euro-Atlantic path, and said it had “delayed” the work on the Association Agreement with the EU and could not seal either visa-free travel or the free trade agreement with the bloc.

In contrast, he called the European Commission's recommendation on granting Georgia European perspective with the set of conditions a “historic decision” and “historic record”.

I remember having very heated discussions during my first term as Prime Minister, when we were agreeing on the text of the Association Agreement. Our [Georgian Government’s] demand was to write 'European' in relation to the country. There was a lot of resistance, and in the end, I agreed and inserted [the term] ‘Eastern European state’”, Garibashvili noted. 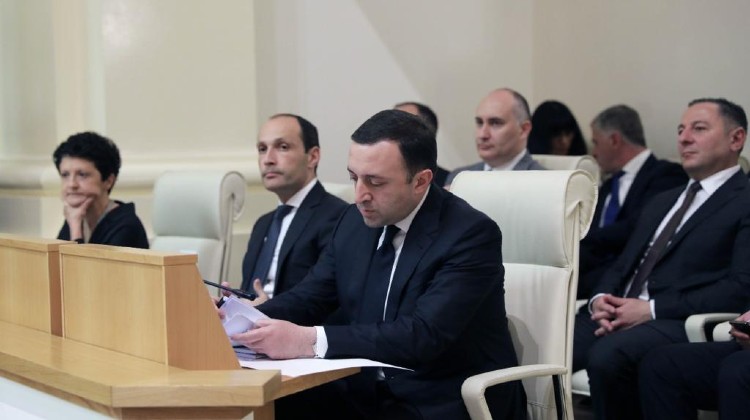 The head of the Government accused the Georgian opposition of lobbying the European People’s Party’s critical resolution on violations of media freedom and the safety of journalists in Georgia, adopted by the European Parliament last week, and of preparing an “unfair and shameful” report about the country, claiming he had been “informed” of it by his European colleagues.

He also accused the EPP and some representatives of the Ukrainian Government of “harmful activities” against granting EU candidacy status to Georgia, and stressed the Georgian Government had done its “best” to receive the status under the “same conditions” as Ukraine and Moldova.

We have managed to keep peace [in the country]. We will not follow these harmful provocations [by the opposition], nor their intentions, or the desire of their partners, or that of the Ukrainians, to open a second front [amid Russia’s invasion of Ukraine] and [create] a second Mariupol here", Garibashvili said in reference to the Ukrainian city that has suffered under Russian siege in the conflict.

He also highlighted “stability” and the “double-digit economic growth” of the country in the first quarter of 2022, and added inflation was also at an “all-time high” in the United States, Germany, France and other European countries.

Garibashvili also noted the Government would begin working with parliament “as soon as” the decision and recommendations of the European Council would be approved and would “complete the process” of implementing recommendations in a timely manner.