The key words for today more than ever is about de-escalation and about coming back to the negotiations trying to defuse the current tensions which we find very concerning”, Ambassador Hartzell told journalists ahead of the meeting.

Referring to the statement from ‘friends and partners from Europe and elsewhere in the last 24 hours’, Carl Hartzel said ‘this is one of the reasons why I am hosting some guests this evening.

We are talking to different sides including my role as a facilitator. So I am looking forward to continuing that talk”, the EU Ambassador said.

US Ambassador Degnan has also stated that both - the ruling party and opposition - are ready to find out a solution out of the current political crisis.

She said 'we will continue to talk' with opposition and the Georgian Dream 'to see if there is a way forward here'. 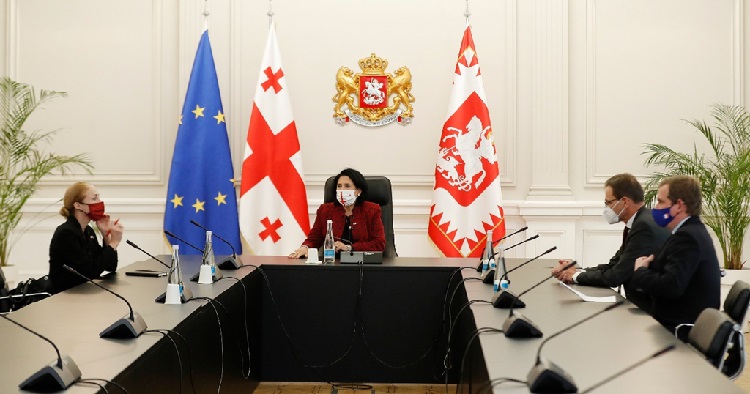 UNM member Salome Samadashvili said after the meeting with ambassadors that Melia’s detention has decreased the chances for further negotiation with the Georgian Dream.

We have never refused to negotiate, but in order the negotiations to yield any results, we should see specific steps from the ruling party concerning the political prisoners”, Samadashvili said.

A number of foreign dignitaries have expressed their concern over Melia's detention at the UNM headquarter shortly after the confirmation of Georgia's new cabinet of ministers.

NATO Secretary General's Special Representative for the Caucasus and Central Asia James Appathurai wrote in a Fecebook post earlier today that 'the detention of the head of a major opposition party is of deep concern'.

Following the detention of UNM chair Melia, opposition politicians and civic activists plan to camp out in front of the parliament building in protest tonight.

Demanding the release of Melia and repeat parliamentary elections, opposition has called on everyone to join a large-scale rally on February 26.

Meanwhile, Irakli Garibashvili  who was confirmed prime minister yesterday stated later in the evening that ‘against the backdrop of the challenges facing the country, it is time for dialogue, not confrontation’.