A long-defunct cableway stop in downtown Tbilisi's Mziuri Park is being repurposed as a contemporary art space, preserving the building for the recreational area and giving it additional functions as part of the park's revitalisation.

Located in the middle of the Mziuri space, which sits between the Chavchavadze Avenue and the highway splitting the Vake-Saburtalo District, the small building had been abandoned for years, with only graffiti artists finding use for its concrete walls.

Recognised by large circular shapes cut out in the concrete from two sides, the former cableway building sits on a slight elevation in the middle of the park restored over the last few years following a heavy 2015 flooding in Tbilisi. 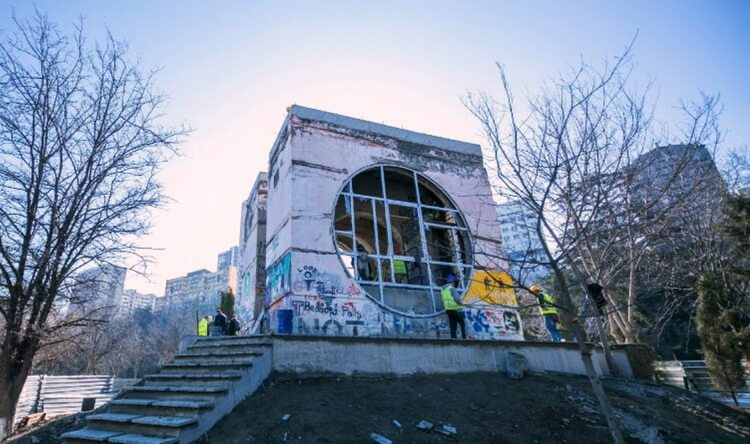 Renovation work ongoing at the site is expected to be completed later this month. Photo: Tbilisi City Hall.

Now it's being cleaned and renovated to serve as an exhibition space, with Cube in Context, an artist initiative involved in contemporary practices, working on the project along with Tbilisi City Hall. The repurposing is expected to be completed later this month, with a subsequent launch of the new space planned for April.

An update on the ongoing work from the city hall said the project aimed to "integrate contemporary art into public space" by placing a multimedia platform in the park, while also creating a space for contemporary artists and researchers for their work.

Beside the two organisations the initiative for giving new life to the building also involves social activist Anna Goguadze, thanked by city mayor Kakha Kaladze for her long-standing support of the Mziuri Park through initiatives for children.

One of the most popular recreational spots in the capital, Mziuri received new basic infrastructure in a reconstruction concluded last year, with bicycle paths, benches, bins and drinking water fountains set up in the area flooded in June 2015. An artificial lake, in addition to a skating area and children's playground, was also set up in the park.