A Tbilisi-based artist collective has brought live music performances to the doors of residents of the city, cheering up neighbourhoods amid ongoing limitations and restrictions of the pandemic.

ConceptArt, a group of creative community event hosts, designers and performers, launched their campaign with the Georgian version of a social media hashtag #MusicAtYourWindow on Wednesday, when they arrived with their moving stage to a housing block neighbourhood near the capital's former Hippodrome Park.

See a fragment from the opening performance of the season of shows by ConceptArt below:

The first stop [of the project] has turned out very impressive. I would like to see the idea of the moving stage kept alive - [our stage is] towed by a trailer truck, enabling us to visit our loyal audiences anywhere" - Teona Jorbenadze, Artistic Director

The roster of artists performed for residents of the flats, with the collective later revealing they had by chance picked a neighbourhood of their loyal audience that attended pre-pandemic events featuring the group. 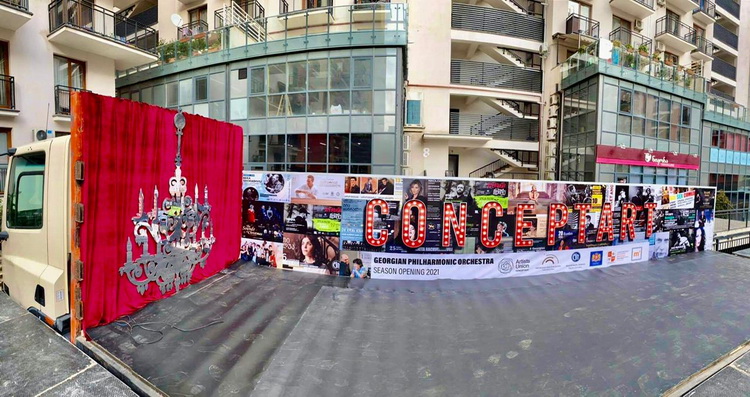 Organisers credit the moving stage concept of the project for having enabled them to bring shows to citizens staying at their homes for social distancing. Photo via ConceptArt.

Conceived by artistic director Teona Jorbenadze, the opening show of the ConceptArt project also involved Rachveli as music director and Ivane Chelidze as stage designer. Hosted by M2 development company, the event was also partnered by the National Intellectual Property Centre of Georgia.

Supported in their initiative by the Tbilisi City Hall, the collective has said the Wednesday performance was the opening phase of a "season" of similar shows, with upcoming events to be announced. Jorbenadze also said she saw the project as "the best alternative" in the realm of performance venues closed due to Covid-19 restrictions.

The group has worked with artists to bring music to audiences in the realm of the pandemic, producing a video for a collaboration between violinist Lisa Batiashvili and singer-songwriter Katie Melua, released online to cheer up those in self-isolation back in the spring.