Employees of cleaning and waste management company Tbilservice Group have gone on strike complaining about their working conditions and demanding an increase in salaries.

The employees on strike told the media that the company management has changed their work schedule and they have to take out the garbage from the city streets at night, between 10 a.m. and 6 p.m. They say average salary is 744 GEL (about $240/€203), that is enough only to buy food monthly for their families.

The company management did not reduce our working hours, they increased them and actually reduced our salaries. We are demanding a 50 per cent increase in salaries”, said one of the employees of the company.

The employees on strike also noted that they have to work with old garbage trucks, which often break down during working hours.

Liquid waste is often spilled from the vehicle tank on Tbilisi city streets, which again leads to unsanitary conditions. We ask the City Hall to replace the old garbage trucks with new ones”, employees of the company told Formula TV.

The employees of the company have demanded an increase in salaries, new uniforms, and free health insurance. They are also complaining that the company management does not allow them to use their full allotment of vacation. 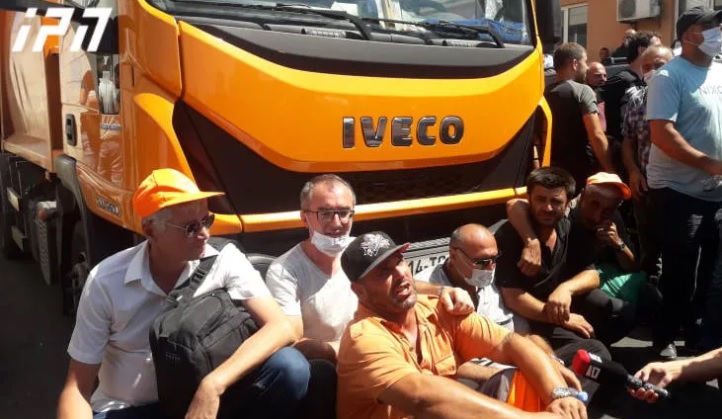 The employees on strike also noted that they have to work with old garbage trucks, which often break down during working hours. Photo: Interpressnews.ge.

Following a two-hour strike, the deputy director of the Tbilservice Group Davit Pachulia promised the employees that they will receive increased salaries starting January.

Deputy Tbilisi Mayor Irakli Khmaladze said that the protest of the Tbilservice Group employees is beyond the law, as they are aware that the company has already planned to increase their salaries and replace old uniforms with new ones in the coming future.

Khmaladze said negotiations have already been completed and the loan has been approved by the European Bank of Reconstruction and Development, which will be used to upgrade the company infrastructure, including garbage trucks.