A protest in central Tbilisi involving activists, artists and citizens on Thursday demanded publication of culture ministry's plans for the Fine Arts Museum collections, transparency around the venue's fate and professional involvement in its restoration.

Following on the last two weeks of speculation around the major venue and its significant collection of cultural treasures, the protest saw the organisers - 'Initiative Group for Fine Arts Museum' - gather in Pushkin Square adjacent to the venue to present their demands.

In the livestreamed event Tbilisi historian Tsira Elisashvili, artist Gia Bugadze and other activists of the group demanded the ministry select "specialists of high professional qualifications and impeccable reputation" for the plans to rehabilitate and renovate the dilapidated venue, part of the Georgian National Museum network.

They also presented a request to the state agency on making the plan for the temporary evacuation of the unique exhibits stored at the museum public, and removing "officials of inadequate qualifications from the process". The ministry has named two nearby venues as probable temporary locations for the Gold Fund of the Fine Arts Museum - a major collection involving numerous cherished items - but has not made its plans available for the public.

The third demand from the initiative group was a general request for "public participation and full transparency" regarding all aspects of the long-awaited rehabilitation of the venue, announced by minister Thea Tsulukiani as part of the ministry's 10-year action plan last week.

Controversy around the Museum of Fine Arts began on July 22, when an engineering study commissioned by the ministry was found to contain conclusions on its current state, including a section that said strengthening the side of the venue facing the adjacent Gudiashvili Street side "might not be commercially viable".

The section led opposition-minded media channels, a part of the public and culture field professionals to conclude the ministry was preparing grounds for "demolishing" the museum for the benefit of a recently constructed nearby hotel belonging to the highly controversial Panorama Tbilisi, a $500 million development project implemented by the Georgian Co-Investment Fund - established by businessman and former Georgian Dream government prime minister Bidzina Ivanishvili.

The claims were made despite the ministry's plans to restore the museum, announced back in April and again in the 10-year action plan presentation. The speculation was aided by managerial changes made by the ministry, including a removal of Eka Kiknadze, the former manager of the museum, from the evacuation plan of the venue's exhibits in April. 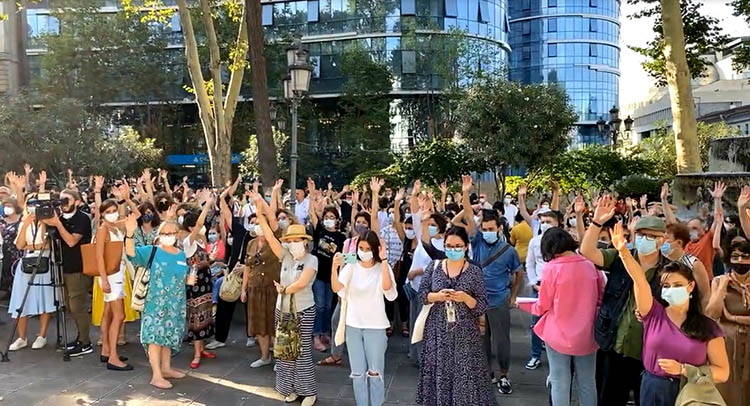 Kiknadze made a social media post on Friday in which she said a new plan for the evacuation, made after her demotion, had not been made available to her despite her administrative letter with the demand. Kiknadze said she and her fellow professionals had seen their mandate for monitoring the process removed, and expressed suspicion that the ministry's new plan for evacuation "simply does not exist."

The former manager of the venue said beginning the evacuation of the museum fonds without making the plan public would be "unacceptable", citing the "army of specialists of various profiles" for moving the exhibits of "Georgian and international cultural heritage" found in "varying composition, age and condition (often grave)".

Beside the activists and museum officials, the culture ministry's plans for evacuating the collections to make way for renovation of the venue have been criticised by local offices of the International Council on Monuments and Sites (ICOMOS Georgia) and International Council of Museums (ICOM Georgia), as well as the Georgian National Committee of the Blue Shield.

The three bodies on Friday released a statement that called "impossible and unrealistic" the state authority's plan to evacuate all exhibits from the museum to neighbouring Georgian National Museum venues within six months, in addition to noting preservation of the monument "would only be acceptable through safeguarding its authenticity and integrity", in contrast to treating its sections differently due to their current state.

The controversy around the museum and its riches was further compounded by a letter from Ilia II, the Catholicos-Patriarch of the Orthodox Church of Georgia, asking Prime Minister Irakli Garibashvili to switch management over the Anchiskhati medieval icon, a major cultural exhibit currently preserved by the Fine Arts Museum, to the Church authority.

The latest letter in the long-standing request from the church has been viewed by some as a possible agreement between the government and the church cementing support ahead of the municipal elections of October 2. The subject was raised by art historian Tamar Amashukeli in an interview with TV Formula channel, while Literature Museum Director Lasha Bakradze told netgazeti.ge the ruling party could be planning to make the decision on handing over the icon to the Church to "gain votes for the election" from the Orthodox electorate.

Commissioned by Iakob Zubalashvili of a notable 19th century Tbilisi family of entrepreneurs and philanthropists, the building now housing the Fine Arts Museum opened in 1835 based on a project by Swiss architect Giuseppe Bernardacci, and is found between Gudiashvili and Pushkin streets near Freedom Square in central Tbilisi. The area is intended to form a "museum district" in Tbilisi, similar in its designation to Berlin's Museum Island complex that brings together a number of venues in close proximity.

Initially serving as a hotel, the venue was later used for a spiritual seminary beginning in 1840. Another hotel opened its doors in the building in 1921, before the Museum of Fine Arts - founded by Georgian painter and public figure Dimitri Shevardnadze - found its home within its walls starting in 1950. Collections of the museum feature around 139,000 exhibits including early Medieval religious iconography and accessories, items of historical architecture and monumental painting.