Three international bodies of cultural heritage monuments and museums have questioned the culture ministry's plans for evacuating precious exhibits of the Tbilisi-based Shalva Amiranashvili Museum of Fine Arts, as well as what they see as a lack of participation of relevant professionals in the planned rehabilitation of the major venue.

Local offices of the International Council on Monuments and Sites (ICOMOS Georgia) and International Council of Museums (ICOM Georgia), as well as the Georgian National Committee of the Blue Shield, on Friday released a lengthy statement on the ministry's recently revealed plans for evacuating the around 139,000 exhibits found at the museum, as well as preparations for strengthening and rehabilitating the venue, itself a monument of cultural heritage.

In their comments to the plans for the venue, the three bodies have called "impossible and unrealistic" the plan to evacuate all exhibits from the museum to neighbouring Georgian National Museum venues within six months. The evacuation phase is contained in the ministry's plans for the museum - set to be rehabilitated from its current grave state - made public this month.

The release from the three cultural organisations makes a comparison with a 2009-2012 effort of moving up to 5,000 exhibits into vaults of the Simon Janashia Museum of Georgia for temporary preservation, citing the two years taken up by the project, in contrast to the comparatively short-term plan for the Fine Arts Museum.

A view showing damage and wear on the interior of the museum that houses some of the most important exhibits in the country. Photo via Ministry of Culture, Sport and Youth of Georgia.

The statement also goes into questions of rehabilitating the museum following the evacuation of its assets, calling conclusions of an engineering study commissioned by the ministry earlier this month "inadequate for concluding an impossibility of restoring the building".

The study said strengthening the side of the venue facing the adjacent Gudiashvili Street  "might not be commercially viable", with the note sparking allegations against the ministry for intentions to "demolish" the venue by the opposition-minded Mtavari Arkhi channel last week. The ministry has denied the intention, with Tsulukiani presenting intentions on the rehabilitation of the museum in the ministry's 10-year action plan on Wednesday.

Preservation of the monument "would only be acceptable through safeguarding its authenticity and integrity", the comments from the associations note, adding a temporary strengthening of the venue - which suffers from cracks, gaps between its sections, deterioration of the state of its base due to groundwater leakage and more - and its monitoring would be necessary.

In a concluding note to the comments, the international bodies see public participation of professionals in planning and reviewing questions around the museum and its exhibits as "necessary", lamenting what they see as an absence of such open approach to the question so far.

In April, the Museum of Fine Arts - housing some of the major exhibits in Georgia, including early Medieval religious iconography and accessories, items of historical architecture and monumental painting - was the focus of an announcement by the culture ministry that said it planned to restore the venue. 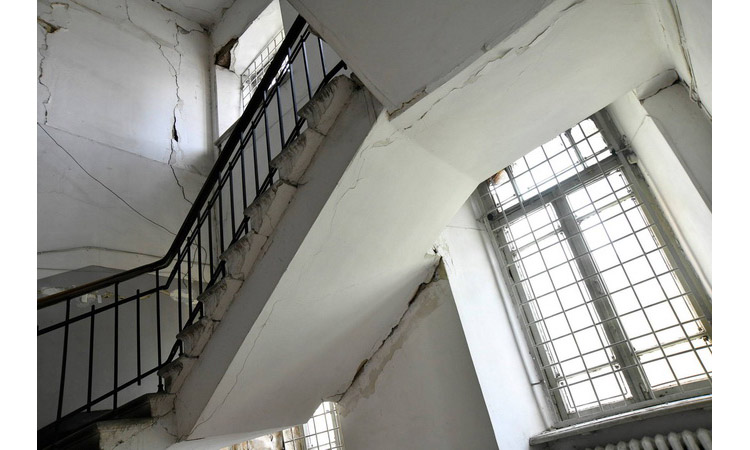 Decades of neglect of the venue, groundwater leaks into its base and external factors have worsened its structural integrity. Photo via Ministry of Culture, Sport and Youth of Georgia.

The announcement followed a 2019 meeting between David Lordkipanidze - General Director of the Georgian National Museum network the Museum of Fine Arts is a part of - with architect Jean Francois Milou and Suzanne Ogge, Director of Heritage and International Projects at studioMilou, on "action plan for rehabilitating" the museum.

Commissioned by Iakob Zubalashvili of a notable 19th century Tbilisi family of entrepreneurs and philanthropists, the building now housing the Fine Arts Museum opened in 1835 based on a project by Swiss architect Giuseppe Bernardacci, and is found between Gudiashvili and Pushkin streets near Freedom Square in central Tbilisi. The area is intended to form a "museum district" in Tbilisi, similar in its designation to Berlin's Museum Island complex that brings together a number of venues in close proximity.

Initially serving as a hotel, the venue was later used for a spiritual seminary beginning in 1840. Another hotel opened its doors in the building in 1921, before the Museum of Fine Arts - founded by Georgian painter and public figure Dimitri Shevardnadze - found its home within its walls starting in 1950.