A newly established union of culture workers has vowed to fight the sacking of up to 20 employees of the Georgian National Museum network this week, after the professionals held a protest in Tbilisi on Wednesday in response to the latest round of controversial dismissals from cultural institutions since the appointment of Culture Minister Thea Tsulukiani.

The Union of Science, Education and Culture Workers of Georgia, which formed earlier this month following a series of sackings from cultural bodies over the recent months, said authorities recently appointed by the Culture Minister to positions within the GNM had ordered a "mass dismissal" of the professionals from the network on Tuesday, following commissions organised to establish their competence as part of a cited reorganisation.

The Union said "professionals of high level" had been sacked as a result of the move, including Union Chair Nikoloz Tsikaridze and scientists participating in "crucial projects". The organisation has called the dismissals "unlawful," alleged a lack of transparency in the process, and vowed to "fight to the end for protecting employee rights."

The employees dismissed from the GNM also held a protest in Tbilisi on Wednesday, with Tsikaridze telling Mautskebeli news outlet their access to museum fonds had also been "restricted" and their projects "suspended" before the sackings. The Union Chair said the group had "exhausted all internal resources" for resolving the matter after unsuccessfully sending letters to newly appointed authorities of the network and offering talks with them. 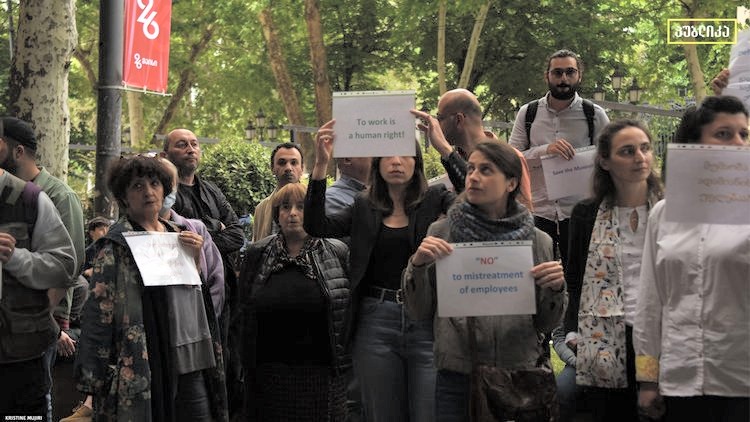 The sacked professionals of the museum network protested the dismissals in Tbilisi on Wednesday. Photo: Kristine Mujiri/publika.ge

Maia Pataridze, a Senior Curator at the GNM relieved as part of the Ministry's move, told the outlet the authorisation for her dismissal had not included a reasoning, only mentioning the decision on the sacking had been made by the commission for establishing the competence of employees. Pataridze said the commission had not spoken to her about her competence, instead discussing her critical social media posts about the current Minister's culture policy. She called the commission's process a "questioning".

In his comments, Tsikaridze also said the new management at the GNM - appointed to join the long-standing existing staff headed by General Director David Lortkipanidze, who has also received criticism from the Culture Minister - had shown an unwillingness to accept "critical views" not only on political grounds but also in questions of museum management.

He also noted his belief was the establishment of the Union to protect culture professionals from unfair dismissals had also served as a basis for the Ministry's response with its sackings. The Chairperson told publika.ge "80 percent" of the dismissed employees were members of the Union, which currently involves around 100 workers from the fields of science, culture and education. 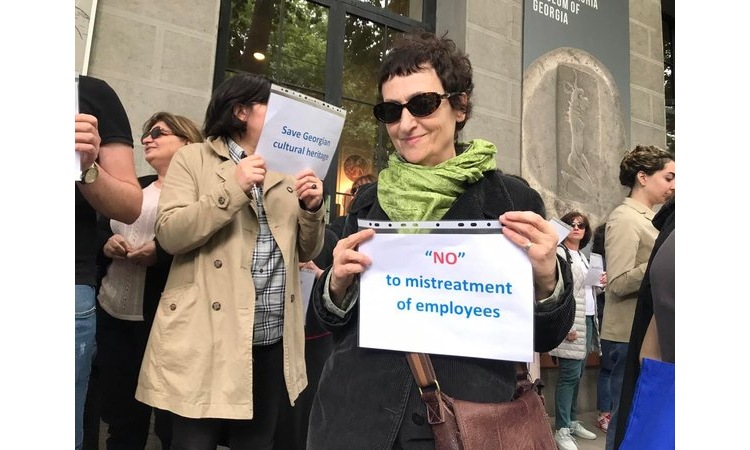 The dismissals - communicated to the museum professionals on Tuesday - follow earlier sackings at GNM institutions and other cultural bodies since Tsulukiani's appointment last year, with court cases launched by employees in some of the cases. Photo via Union of Science, Education and Culture Workers of Georgia

In a separate interview with Radio Free Europe/Radio Liberty's Georgian service, Tsikaridze - an archaeologist who has worked on projects including the contemporary work around the major Dmanisi archaeological site in the country's south - expressed his belief the Ministry would not be able to adequately replace the professionals with its own cadres.

The dismissals follow an earlier development from the GNM in November, when 10 professionals were sacked from the network or demoted to lower positions. Social Justice Centre and Georgian Young Lawyers Association, two Georgian non-governmental organisations, said they would represent the group in in court against the decision.

One of the highly publicised of the dismissals has been one for Ekaterine Kiknadze, a former manager at the Museum of Fine Arts - a venue of the GNM network - who was demoted after she requested to be informed about the plan for evacuation of collections from the museum that has been designated for a major renovation effort.

In her social media comments on the new sackings of professionals this week, Kiknadze alleged they had been removed on political grounds after Nika Akhalbedashvili - a former lawyer of the Ministry of Justice formerly headed by Tsulukiani, recently appointed to the position of the Fine Arts Museum Director - had confronted them with their social media records showing criticism of the Minister and Akhalbedashvili himself. 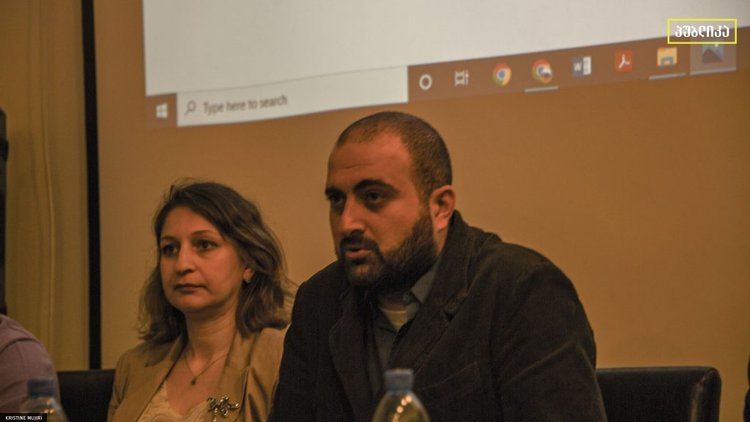 Nikoloz Tsikaridze, the Chair of the recently formed Union of Science, Education and Culture Workers of Georgia, said 80 percent of the dismissed employees were part of the Union. Photo: Kristine Mujiri/publika.ge

Wednesday's protest of the relieved group of GNM professionals follows other controversy between a part of the culture field professionals and the Ministry under Tsulukiani since her appointment in the spring of 2021.

In January, a Tbilisi protest demanded resignation of Tsulukiani and an end to "Bolshevik purges" at culture institutions since her appointment. In March, Gaga Chkheidze, the former Director of the Georgian National Film Centre who was relieved of his position by Ministry with allegations of "misuse of funds" and "potential cases of nepotism" at the GNFC, said he would sue the national body if not reinstated to the position.

Earlier this month, a group of Expert Commission members of the GNFC launched a legal dispute against their dismissals and alleged the Culture Minister’s bias in their replacement on the positions in the midst of work to select winners of the body’s current competition for feature films. They will be represented by the International Society for Fair Elections and Democracy non-governmental organisation in the dispute, with the ISFED saying the termination of their contracts with the GNFC did not meet required standards.