A group of volunteers supported by state agencies and private enterprise descended on a section of western Georgia's Black Sea coast last weekend to successfully complete what has been called the "largest ever" cleanup effort of the coastline.

Involving environmentally-minded citizens, the group saw hundreds of young citizens, local residents and volunteers from a hiking community collect a massive amount of rubbish from the beach, while being assisted by municipal hardware from local government of the province of Guria.

Video footage released by the volunteer group during their work on the coast section between the towns of Shekvetili and Kobuleti over the weekend:

Organisers said around 30,000 square metres worth of consumer waste - mainly plastic bottles but also pieces of fabric and other plastic items - had been cleaned up by the team that worked over the two days of the weekend on the coast.

The initiative started when the massive amount of rubbish was discovered ahead of the summer season, after it was washed ashore by the sea. The team of organisers set a plan in motion to remove the waste, receiving financial support from private sector as well as resources of Solid Waste Management Company of Georgia. 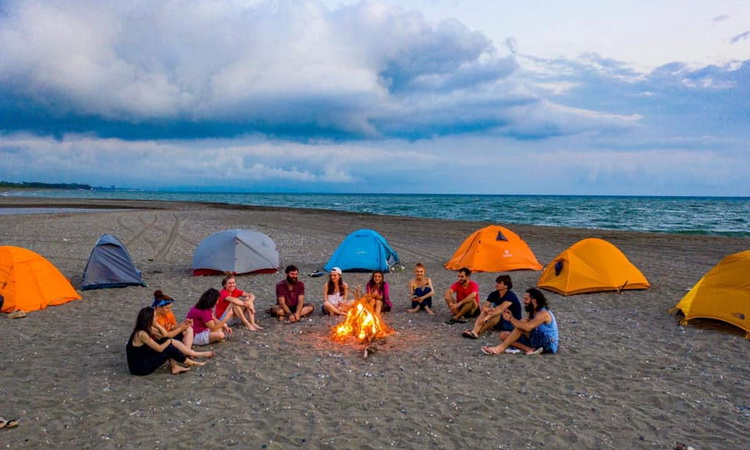 A few of the hundreds of volunteers gathered on the cleaned-up beach after the successful conclusion of their work. Photo: Goga Chanadiri.

They also gained awareness for the project by recording and releasing a viral social media video showing the polluted coastline and narrated by popular author Dato Turashvili, who lamented the pollution damage to the seaside and challenged his fellow citizens to change their behaviour with regard to the environment.

In their summary of the weekend work on the previously polluted section - located between the resort towns of Kobuleti and Shekvetili - the organising group said the stage agency for solid waste management would take over the subsequent task of ensuring clean conditions of the beach section.