Kaladze and Kobakhidze stated in Strasbourg yesterday, after meeting with several MEPs, that the mission ‘will have the full opportunity’ to familiarize itself with the case details concerning former Tbilisi Mayor Ugulava, who was convicted earlier this week for the embezzlement of 48 million GEL while in office.

Kobakhidze said that MEPs had questions regarding the case.

The creation of such a mission is absolutely possible in the European Parliament and we have received positive feedback regarding the issue. We hope that the mission will come to Georgia soon and look into the case. I am sure that the MEPs will see that 48 million GEL was embezzled and will say that such crimes must not be left unpunished,” Kobakhidze said. 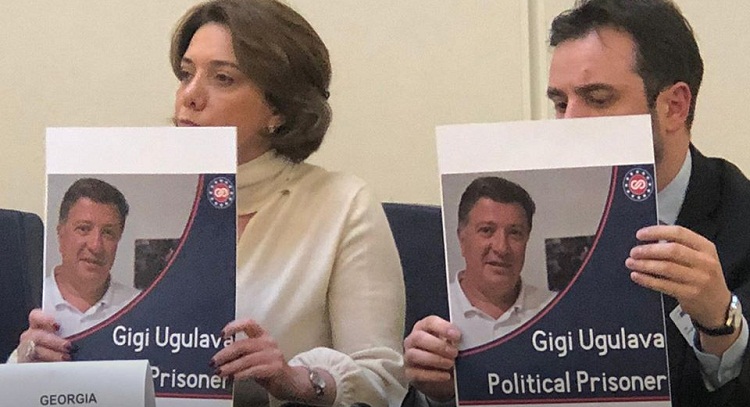 The opposition says that Ugulava is a political prisoner. Photo: Mtavari Arkhi.

He also told MEPs that the ruling party proposal for the 2020 elections, on the distribution of 100 seats in parliament based on the proportional system and the remaining 50 via the majoritarian system ‘is the only proposal’ which will be able to receive at least 113 votes in parliament for approval.

The United National Movement MP Salome Samadashvili has stated that ‘no one knew’ Kobakhidze and Kaladze in the European Parliament and ‘they could hardly hold’ several meetings.

Samadashvili and fellow member of the UNM Otar Kakhidze displayed posters during the EU-Georgia Association meeting which read ‘Gigi Ugulava is a political prisoner.’