Prime Minister of Georgia Giorgi Gakharia held a number of meetings at European Union headquarters in Brussels, Belgium today, with the upcoming parliamentary elections in Georgia, Georgia’s aspiration for EU membership and further relations with European Union were high on the agenda.

President of the European Council Charles Michel said on his official Twitter account that he had an “excellent discussion on how to further intensify EU-Georgia relations”.

Glad to welcome prime minister @GakhariaGiorgi of Georgia in Brussels.

Excellent discussion on how to further intensify EU-Georgia relations as per the cornerstone Association Agreement.

Gakharia stressed that Georgia can become an important alternative transport and telecommunication centre for the EU as well as a key energy corridor.

October parliamentary elections in Georgia were also the subject of discussion. Gakharia said he hopes to see as many European observers  monitoring the elections as possible.

Cybersecurity and partnership in the field was also discussed as one of the risks and an issue for the upcoming elections. Gakharia underlined that Georgia has faced cyber threats several times during the past years, the last case targeting the country’s healthcare system and the Lugar laboratory. 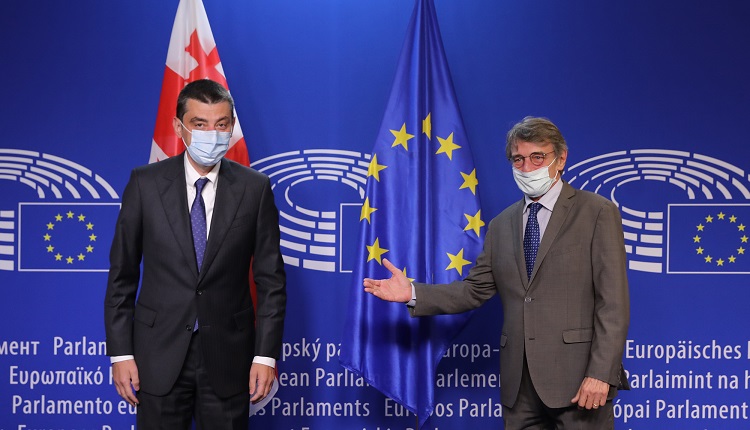 Elections and election reform was one of the issues discussed at the meeting with President of European Parliament  David-Maria Sassoli. PM Gakharia underlined the election will be held in a free, fair and transparent  environment. Georgian government invites the observers from the European Parliament and guarantees their safety in the country.

The new initiative of the Easter Partnership was also discussed as “Georgia deserves  ‘more for more’ approach as an associated member,” Georgian government press release reads.

Georgian Foreign Minister David Zalkaliani stated in his remarks to the media Georgia has an ambitious plan towards integration with the EU as  “Euro integration is Georgia’s main foreign policy priority which is written in the Constitution.”

We need more physical integration in various parts of the economy: transport, energy, communication, more participation in EU programmes and agencies. Georgia should act as an already aspirant country and the expectations both in Georgia and here that the country will have the fastest process of EU integration were underlined at all our meetings,” Zalkaliani said.

Vice President of the European Commission Margaritis Schinas stressed the importance of furthering EU-Georgia relations in his tweet after the meeting with PM Gakharia.

Excellent meeting with Prime Minister @GakhariaGiorgi. The EU values its close relationship with #Georgia, which must - and will - become closer still. pic.twitter.com/XXbkW2RygH

At all meetings were discussed the situation at Georgia's occupied territories, the ongoing borderisation and humanitarian crises as the result of the restriction of  the freedom of movement for the locals.

The main topics discussed at the meeting of PM Gakharia and EU Commissioner for Home Affairs Ylva Jojansson were labour migration and possibility for the Georgian citizens to work legally in the EU. Commissioner Jojansson positively assessed new regulations for travel to the EU for Georgians approved by the Parliament in the beginning of September and Georgia’s cooperation with Europol and Frontex.

“Georgia needs more progress in the euro integration process, as our aim is membership in the European Union,” Gakharia said.

Tomorrow the Georgian PM will continue his meetings in EU headquarters, his schedule includes meetings with EU Commissioners and the head of Foreign Committee of European Parliament David McAllister.