NATO Sec-Gen Stoltenberg: “keep making full use of all opportunities to come closer to NATO, prepare for membership”

Great to meet with Prime Minister @GakhariaGiorgi and Foreign Minister @DZalkaliani. #Georgia is one of #NATO’s most important partners & makes key contributions to our shared security. pic.twitter.com/rjXUwgNmUU

After the meeting Prime Minister Gakharia and NATO Secretary General Stoltenberg held a joint press conference. Stoltenberg stressed Georgia is one of NATO’s most important partners, contributing to the alliance’s shared security in many ways, including with troops in NATO’s training mission in Afghanistan.

Stoltenberg also underlined that NATO welcomes the progress Georgia is making on reforms, stressing that Georgia has already made good progress in modernising its armed forces and in strengthening democracy.

And I encourage you to continue making full use of all the opportunities for coming closer to NATO. And to prepare for membership. We count on Georgia to ensure next month’s elections meet the highest international standards. This is important for Georgia, and for NATO”, he said. 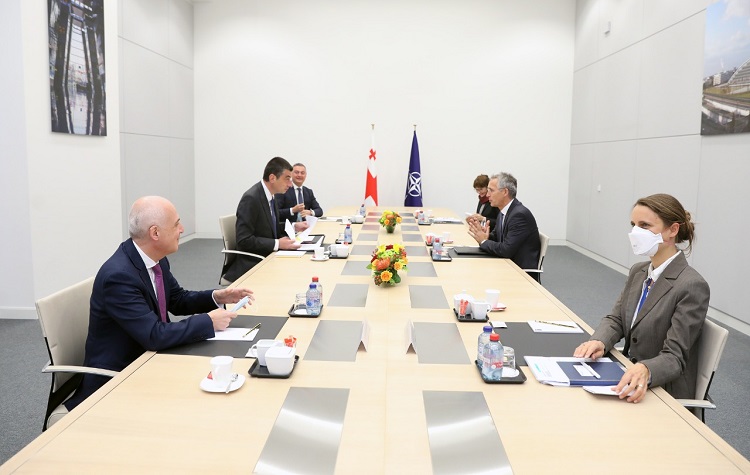 "We count on Georgia to ensure next month’s elections meet the highest international standards. This is important for Georgia, and for NATO”, Stoltenberg said. Photo: Press office of PM Gakharia.

“I have, in particular, underlined the importance of continuing reforming the judiciary, and also making sure the full democratic oversight of the security services. Georgia has made and is making progress on all these areas, and we welcome and encourage further focus on reform, and we also discussed that during our meeting,” NATO Secretary General said.

“NATO supports Georgia’s territorial integrity and sovereignty within its internationally recognised borders. We call on Russia to end its recognition of the regions of Abkhazia and South Ossetia and to withdraw its forces”, he said.

My press statement at @NATO focused on Georgia's dedication to free & fair elections to ensure the sustainability of our institutional democracy. The October elections will demonstrate that we’ve done our homework & are ready to join the European & Euro-Atlantic community. pic.twitter.com/pNqXTDUskk

Stoltenberg thanked Prime Minister Gakharia for his strong personal commitment to the alliance and said that “NATO’s partnership with Georgia makes us all safer and more secure”.