Foreign ambassadors have urged all parties of the March 8 election agreement to ‘fully abide by the terms’ as Georgian parliament will vote on the election bill drafted per the agreement, in its first reading, on Sunday.

The facilitators say that the March 8 agreement was a ‘historic achievement’ and the bill establishes a more proportional electoral system in Georgia for the Autumn elections.

We recognise that differences remain regarding implementation of the Joint Statement portion of the agreement. We underline that the commitments made to address actions that could be perceived as inappropriate politicisation of Georgia’s judicial and electoral processes will remain crucial in the period leading to the upcoming elections, and their implementation will continue to be monitored closely,” said the statement released by the EU in Georgia press office.

The facilitators encouraged all signatories to the March 8 agreement to participate in this ‘important vote’ and ensure that the amendments are adopted.

Joint Statement by the Facilitators to the Political Dialogue in view of upcoming voting in the parliament.

Passage of these amendments, along with pending election reform legislation that incorporates OSCE ODIHR recommendations, will advance Georgia’s progress toward a more representative Parliament and contribute to depolarizing the political environment – achievements that we sincerely believe are in the interest of Georgia’s democracy and the Georgian people,” said the statement.

The Georgian parliament has begun discussing a bill earlier today  regarding the upcoming parliamentary elections.

The bill is scheduled to be voted on Sunday in its first reading.

The opposition parties which support the amendments say that they will not vote for the bill  as the ruling Georgian Dream party ‘refuses to fully abide by the March 8 election agreement,’ made in the talks mediated by the diplomatic corps. 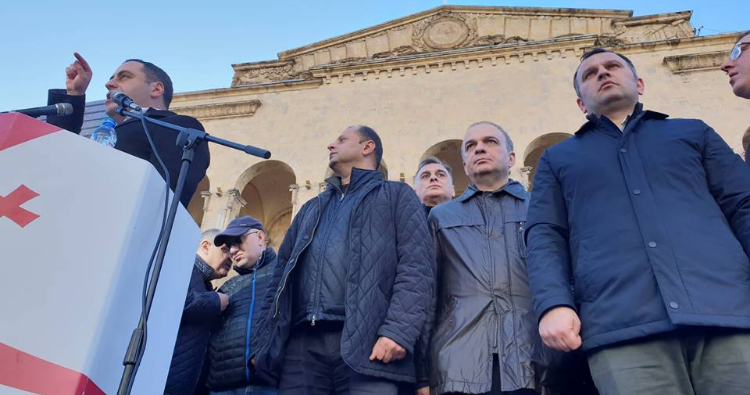 The united opposition is demanding the release of Giorgi Rurua to vote for the bill.

The opposition says that the last precondition for them to vote for the bill is the release of a co-founder of the opposition-minded TV channel Giorgi Rurua.

The adoption of the constitutional changes, which is planned for June 29, needs at least 113 votes in the 150-member parliament.

If the opposition refuses to vote for it, the bill may be rejected.