The roster of museum venues across Georgia has been bolstered with the newest addition, as the Georgian National Museum network unveiled the Bolnisi Museum in the historical southern town on International Museum Day on Monday.

The new location, announced "after several years of work", was presented by the GNM in an update on their social media and described on their website as a "model of the 21st century regional museum".

Bolnisi Museum is a model of the 21st century regional museum and the new ecosystem in general – where different segments as science, culture, education, and tourism coexist in one space" - GNM

Located in the town that also bears legacy of 19th century German settlers from Swabia, the museum is a major addition to the locality that has seen a reinvigoration of tributes to its original inhabitants in recent years. 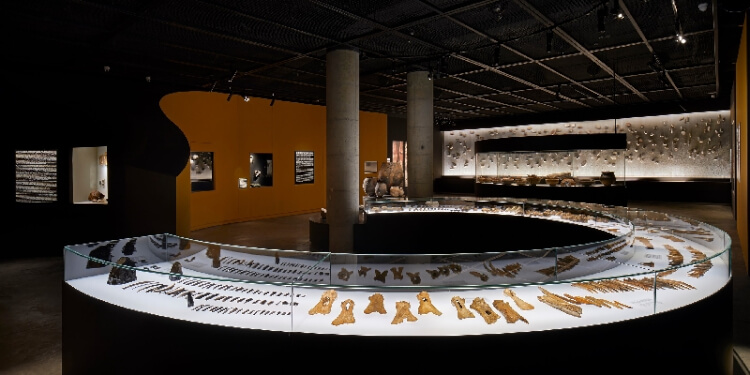 The museum's exhibitions include items on the history of the first hominins, ancient metallurgy and stone inscriptions. Photo via Georgian National Museum.

In a nod to this context, a multimedia library by the Goethe Institute has been unveiled at the new venue with German-language textbooks, a library and visual and audio collections.

Devised in a collaborative effort involving Georgian professionals and their colleagues from a number of German institutions and the University of Toronto, the Bolnisi Museum is seen by the GNM as a "cultural hub" for locals.

Built based on a project by Gaga Kiknadze of architects.ge, its spaces were structured as a result of work involving GNM professionals and "leading European institutions", the network's release said.

One of the halls of the new museum that also presents the legacy of the German settlers in the province starting in the 1910s. Photo via Georgian National Museum.

A permanent exhibition area houses natural and historical collections concerning the region, with a specific hall created for the history of 19th century German settlers in the Kvemo Kartli province.

Also contributing to the work were the Berlin State Museums, the Senkenberg Research Institute and Museum, the University of Tübingen, the Tübingen City Museum and the Union for Preservation of German Cultural Heritage in the South Caucasus.

Beside being coincided with International Museum Day, the unveiling of the Bolnisi Museum also comes during the 15th anniversary of the GNM network, which comprises over a dozen museums and "house museums" across the country. More details about the newest venue can be found on the network's official website.