Children's author Irma Malatsidze and the School of Art in the central Georgian village of Nikozi have been selected as the country's nominees for the next edition of the Astrid Lindgren Memorial Award in Stockholm.

In the 2021 edition of the prize promoted as “the World's Largest Children's Literature Award”, Malatsidze, a writer and translator, and the Nikozi school, named after the  late 19th century bishop St Aleksandre Okropiridze, will be the two candidates from Georgia.

Malatsidze has published works in children's literature since 2004 and was unveiled as a winner of Georgia's 2018 Pen Marathon contest at the Frankfurt Book Fair.

A co-founder of the Children's Literature Development Fund in Georgia, she has also been nominated for the Saba Literary Award in Georgia, with her work featured in literary publications, collections and primary school textbooks. 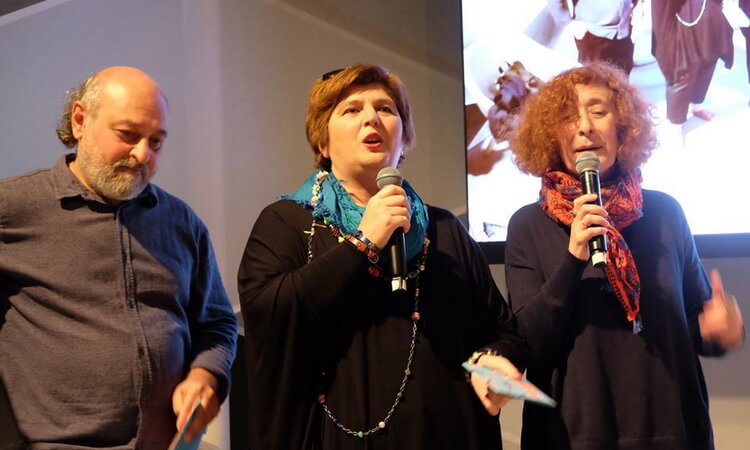 Author Irma Malatsidze (middle) was unveiled as a winner of Georgia's 2018 Pen Marathon contest at the Frankfurt Book Fair. Photo via Diogene Publishers.

The Nikozi Art School was established in 2009 on the initiative of Diocese Metropolitan of Tskhinvali-Nikozi, Isaiah, who is also founder of the annual Nikozi International Animated Film Festival.

Along with classes of Georgian and foreign languages, the school teaches animation, visual arts and more. The latter two classes are supported by the Embassy of Poland in Georgia.

The school and the children's author were nominated by the National Parliamentary Library of Georgia, the body selecting candidates for the ALMA prize from the country every year.

Organisers for the ALMA prize accept nominations for authors, illustrators, “oral storytellers and reading promoters”, with nominees unveiled at annual Frankfurt Book Fair events before a laureate is announced the following spring.