Georgian President Salome Zurabishvili, who has attended January 14 celebrations of Old-New Year in Guria region of western Georgia, has offered the way of celebration of Old-New Year on the day, which is called Kalandoba in Guria, and the Georgian Christmas tree Chichilaki, which also comes from the region, to be included on the UNESCO Intangible Cultural Heritage List.

Amazing event! Let’s always remember the proud celebration of #Kalandoba that the good people of #Guria have celebrated for centuries. From the town of Dvabzu, we start our work to bring Kalandoba into the @UNESCO Intangible Cultural Heritage List. pic.twitter.com/p8scIO3Q0b

The ancient tradition of Kalandoba was observed late yesterday in the village of Dvabzu, Guria, for the Georgian president, Parliament Speaker Archil Talakvadze and foreign diplomats.

I appeal to the Cultural Heritage Protection Agency to take steps to include Kalandoba and Chichilaki in the UNESCO list,” Zurabishvili stated.

The #chichilaki, the Georgian christmas tree from the region of #Guria, is an environment-friendly and historical tradition that we cherish deeply. From Guria, I’m happy to announce we’re going to do our best to bring the #ჩიჩილაკი into @UNESCO’s Intangible Cultural Heritage List pic.twitter.com/Yu8yVi341h

Zurabishvili met the Orthodox New Year by the Julian calendar in the Chkhatarashvili family with six children in the village of Shemokmedi, Guria region.

It is the first time I meet a New Year in the Guria region, a region of strong traditions,” Zurabishvili said.

Members of the United National Movement opposition met Zurabishvili with a protest in the region, with some of the demonstrators calling her the ‘slave’ of the founder of the Georgian Dream ruling party Bidzina Ivanishvili. 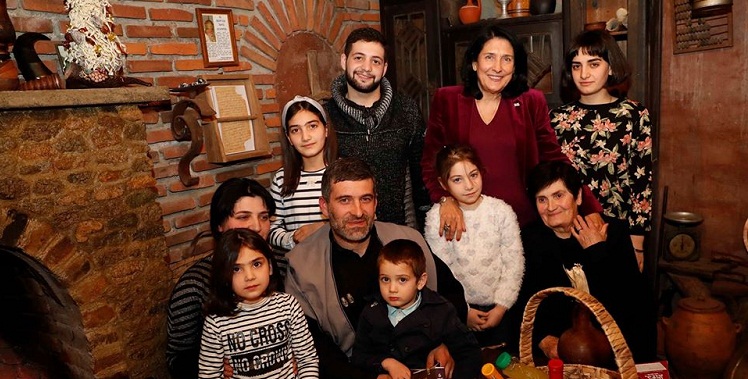 Zurabishvili responded that ‘we live in a free country and everyone has the right to express their view.”