EU-Georgia Association Parliamentary Committee, which discusses and assesses progress in the EU-Georgia relations, has held its eight meeting in Strasbourg yesterday and praised the progress achieved by Georgia between 2014 and 2018.

The meeting was chaired by head of Parliament’s European Integration Committee Tamar Khulordava and chair of the EU-Georgia Association Parliamentary Committee, a member of the European Parliament Sajjad Karim.

The committee concluded that the EU-Georgia Association Agreement (AA) and the Deep and Comprehensive Free Trade Area (DCFTA) deals are being successfully implemented.

One of the biggest achievements of the EU-Georgia relations is a visa free deal, with 300,000 Georgians using the opportunity,” the committee said in its conclusion.

The committee welcomed the measures taken by the Georgian government to hamper illegal flow of Georgians to the EU-member states. 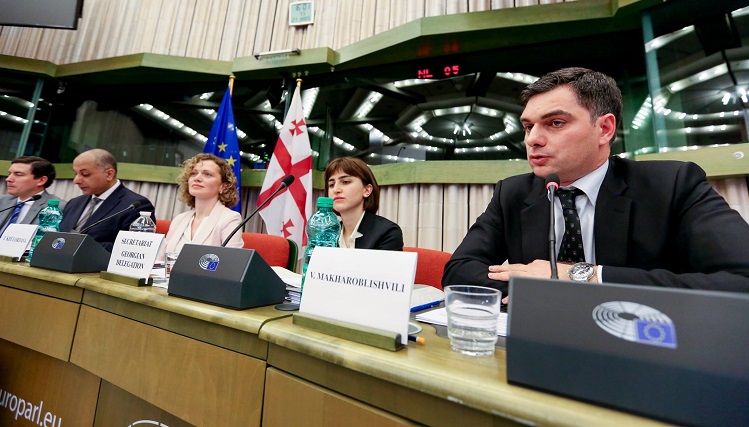 The Georgian government members briefed the committee regarding the measures against the illegal flow of Georgians abroad and the situation in the two occupied regions of Georgia. Photo: Parliament's press office.

The committee conclusion in short:

The committee reaffirmed its strong support for Georgia’s sovereignty and territorial integrity, condemned Russian aggressive activities on the Georgian territory and welcomed the steps by the Georgian government to peacefully resolve conflicts.