The Georgian Interior Ministry has dismissed allegations by the family of a 15-year-old of allegedly applying psychological pressure at Tbilisi Didube-Chugureti police station last week, which may have led to a suicide attempt by the minor.

Police say that the minor was interrogated twice “in the presence of his parents” at Didube Chugureti police station on December 10 and 11 for inflicting damage to the property of Mtsvane School in Tbilisi and writing vulgar phrases on the walls of the school.

The ministry has confirmed that the minor spent “only 3-4 minutes alone” with one of the police officers before the beginning of  the interrogation as the “minor had a conflict with his mother and the police officer tried to calm the situation.”

The ministry says that they are actively cooperating with the State Inspector’s Office, investigating alleged offences committed by law enforcers. 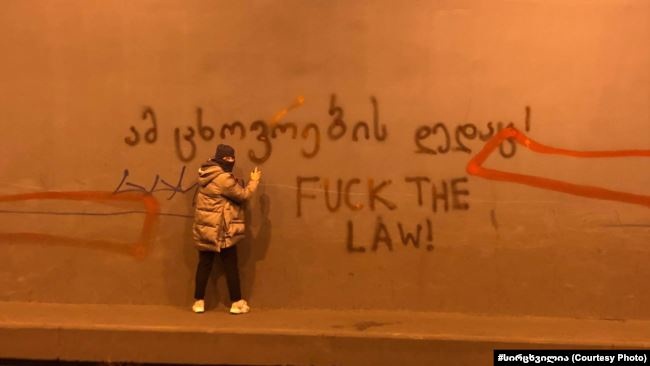 The civic movement Sirtskhvilia (Shame) has made inscriptions in Tbilisi, at various places, in protest of the incident, supporting the minor.

The family says that the minor, who is in coma now with severe head trauma and multiple fractions, suffered psychological pressure from law enforcers to admit to the crime and attempted suicide on December 11, after the second interrogation.

The family says that the minor was forced to admit to the crime on December 10, while on December 11 the minor changed his testimony and said that he was innocent, before jumping from the ninth floor.

The Mtsvane School administration says that the minor was identified with the use of surveillance cameras and he is a former student of the school.