Former Prosecutor General of Georgia Zurab Adeishvili has been sentenced to five years and three months in prison in absentia, while MP of the United National Movement (UNM) opposition party Nika Melia has been banned from taking public office for two years and three months in the high profile case of Cartu Bank, involving the founder of the ruling Georgian Dream (GD) party Bidzina Ivanishvili.

Melia will also have to pay 25,000 GEL [8,389 USD] fine for his role in the case as the former head of the State Enforcement Bureau back in 2012, when Ivanishvili announced his political plans to defeat the nine-year-governance of the UNM.

The 2012 case concerns “the plans of the UNM government to deliberately bankrupt the bank founded by Ivanishvili and hamper his political intentions,” the Georgian Chief Prosecutor’s Office says.

Now it is up to the parliament to decide whether or not to dismiss Melia as an MP.

Melia is now on bail “for incitement to violence” during the June protests in Tbilisi. 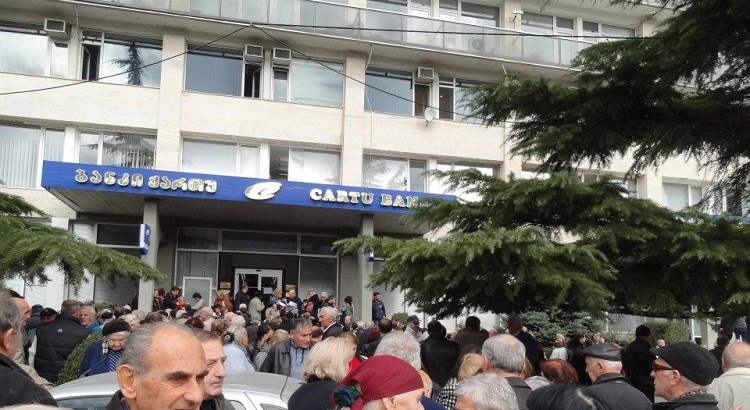 Cartu Bank was founded by Ivanishvili in 1996. Photo: Cartu Bank.

What is the Cartu Bank case?

The Georgian Chief Prosecutor’s Office says that after Ivanishvili announced his politician plans back in October 2011 the UNM “elaborated a plan, composed of several stages to harm him.”

The first stage of the plan concerned the adoption of legal amendments which allowed the sale of the properties of legal entities by the state, via an auction, in the case of detection of tax violations, even though the property was mortgaged by a bank,” the Georgian Prosecutor’s Office says.

The Prosecutor’s Office reports that former state officials made illegal deals with the legal entities having loans from Cartu Bank for them “to admit their tax violations.”

Following this the properties of the legal entities, which were mortgaged by the bank, were auctioned for sale by the state.

To prevent the repurchase of the properties by Cartu Bank at a reasonable price, the auctions were deliberately rejected by former head of the State Enforcement Bureau Nika Melia,” the Prosecutor’s Office says.

After the rejection of the auctions the state used to sell the properties, at a symbolic price, to legal entities which previously owned the properties and were in an illegal deal with the government against the bank, the Prosecutor’s Office said.