Demonstrators who participated in the June rallies and the opposition have blocked Rustaveli Avenue in central Tbilisi and announced the “largest rallies ever” after a ruling Georgian Dream (GD) party proposed election bill was scrapped earlier today as many GD MPs refused to vote for it.

The ruling party accepted the conduct of 2020 parliamentary elections on a fully proportional system amid the June public protests in Tbilisi, as it was one of the three demands of demonstrators to stop rallies.

Now the demonstrators say that the state leadership has cheated them.

Members of European Georgia and the United National Movement opposition parties are rallying with them.

The demonstrators have urged the public to join them at 7 p.m. today. 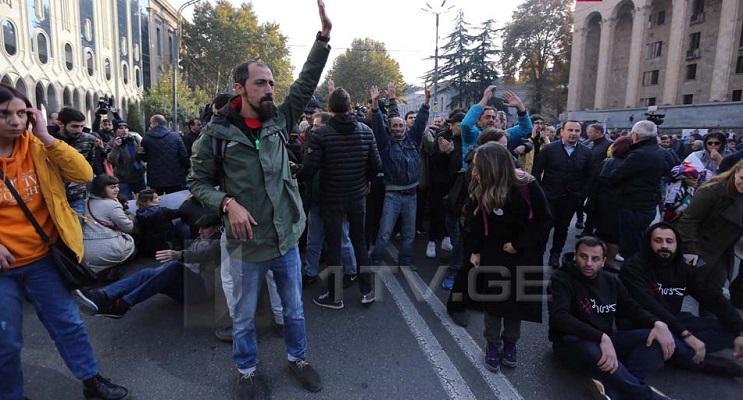 Demonstrators have urged public to join them. Photo: 1TV.

Passing the bill, which allowed the conduct of 2020 parliamentary elections with a fully proportional election system and a zero election threshold, needed at least 113 votes in the 150-member parliament.

Three MPs of the ruling party voted against and 37 others abstained from voting the bill which was drafted by 93 GD MPs in the summer.

The opposition and the civil sector have been demanding the change in the election system for many years, saying that the majoritarian election system is “unfair and doesn’t ensure justified distribution of votes.”

As the bill was scrapped the 2020 parliamentary elections will be conducted with a mixed-electoral system (with 77 seats allocated proportionally under the party-list among parties and remaining 73 MPs will be elected in 73 single-member districts, known as “majoritarian” mandates), three per cent election threshold and election blocs will be allowed to participate.

According to the Georgian constitution the country will move to fully proportional elections from 2024.