Scientists have successfully sequenced DNA data from a tooth of an ancient rhinoceros found in Dmanisi archaeological site in Georgia, shifting the date of the oldest genetic information recovered from animal fossils back by a million years.

In a study by 43 scientists including Georgian researchers, proteins of dental enamel from a stephanorhinus dated about 1.77 million years ago were studied to offer a “breakthrough” in ancient biomolecular studies.

The recovery of information marks a significant milestone — until now, the earliest DNA sequenced from animal fossils was considered to be the one from remains of a horse dated back 700,000 years and discovered in north-western Canada.

An article from the University of Cambridge called the study a “breakthrough in the field of ancient biomolecular studies” which “could solve some of the biggest mysteries of animal and human biology” by reconstructing evolutionary picture from earlier historical eras than it was possible so far. 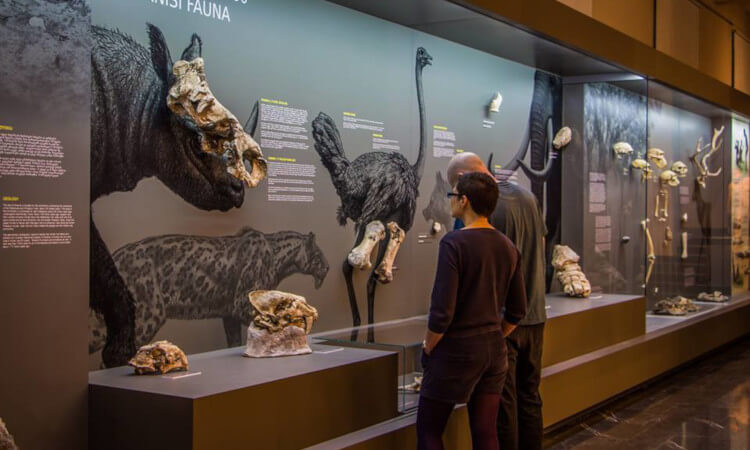 The Dmanisi site has been under archaeological and scientific studies since the discovery of a tooth of ancient rhinoceros at the location in the 1980s. Photo: Georgian National Museum.

The study itself came from scientists at the University of Copenhagen and St John’s College of the University of Cambridge and was published in the scientific journal Nature. The authors said they also managed to uncover “additional information about the sex and taxonomic assignment of other specimens from Dmanisi”.

Dated to the Lower and Early Late Pleistocene era, stephanorhinus is a now-extinct type of ancient rhinoceros that was found on the territory of northern Eurasia.

Animal fossils of epochs earlier than about 0.5 million years ago are usually limited in potential to reveal their DNA information to scientists due to their irreversible degradation, which highlights the significance of the Dmanisi fossil study.

The project for biomolecular studies was established in cooperation of the Georgian National Museum and the National Museum of Denmark, with research carried out in laboratories at Copenhagen, Cambridge and Max Planck universities.

The research is another historical revelation from Dmanisi, a site in Georgia’s south that shot to international prominence with a 1991 discovery of the oldest remains of early human fossils outside Africa, dated about 1.8 million years ago (the honour has since gone to stone tools dated 2.1 million years ago and discovered in Shangchen, China last year).

The Dmanisi location has been under scientific studies since 1983, when a rhinoceros tooth was discovered at the location in a Medieval pit for household work.