The Russian Foreign Ministry shared “serious concern over the escalation of tension on the border between South Ossetia and Georgia” caused by the construction of Georgian police checkpoint close to the villages of Chorchana and Tsnelisi on both sides of the occupation line.

Over the past few months, Tbilisi deliberately escalated tensions on the border through provocative actions and political propaganda campaigns supported by the western countries”, the Russian Foreign Ministry stated on Friday.

It also said “these provocative actions” have been carried out with the background of “Tbilisi’s repeated refusal” to Tskhinvali “to start negotiations on the delimitation and demarcation of the border.”

Under such circumstances the South Ossetian side is forced to carry out all of the engineering works unilaterally”, the Russian Foreign Ministry said, explaining that by doing so Tskhinvali aims to “create safety conditions” on ground.

The US Department of State released a statement on Friday as well, calling on Russia “to utilise all available channels to prevent further escalation of the situation” along the occupation line.

The representative of the Georgian State Ministry for Reconciliation Zviad Zviadadze visited the village of Chochana and spoke with the local population on August 30. Zviadadze told the locals that they have no reasons for concern and can continue peaceful life. 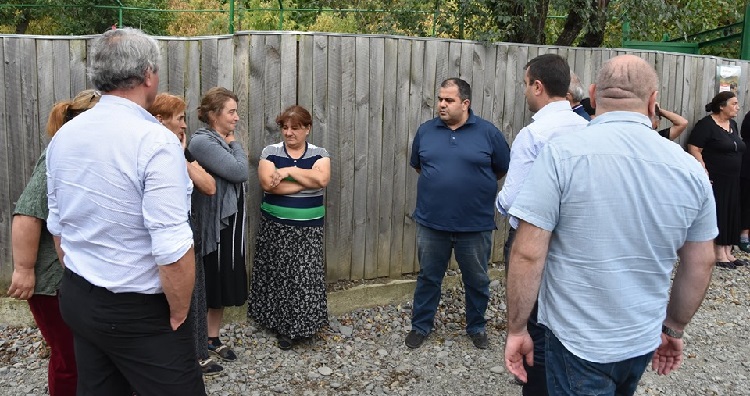 Zviad Zviadadze familiarised himself with the problems of the local population on ground. Photo: State Ministry for Reconciliation

The European Union Monitoring mission (EUMM) Head Erik Hoeg also wrote on his Twitter account at midnight saying  “everything quiet so far” at the Chorchana/Tsnelisi area.

The recent Incident Prevention and Response Mechanism (IPRM) was disrupted on August 29 as as de facto South Ossetian officials left the meeting in protest after Tbilisi refused to dismantle the police checkpoint near the village of Chorchana, close to occupied village of Tsnelisi.

Although Georgian officials unanimously said the police checkpoint will not be dismantled, de facto president of occupied Tskhinvali Anatoly Bibilov said this demand remains unchanged. Meanwhile, the de facto "security committee" said that a "humanitarian operation" will be carried out in the Russia-occupied village of Tsnelisi anyway.