TBC Bank founders Mamuka Khazaradze and Badri Japaridze have officially been charged with laundering $16.7 million in 2007-2008. Khazaradze says that the charge “aims to stop the construction of the Anaklia Deep Sea Port.”

The government continues its actions against me and Japaridze which they started in January 2019. The moves by the government have affected us, as well as shareholders of TBC Bank, the implementation of the Anaklia Port project and the state,” Khazaradze said.

He stated that he “is not going to stop and is ready for everything [even for detention].”

No one will make me stop and the port will be built anyway. If somebody thinks that it is Khazaradze’s project, they are very mistaken, as it is a project of our children. The project is a big step taken towards Europe,” Khazaradze said. 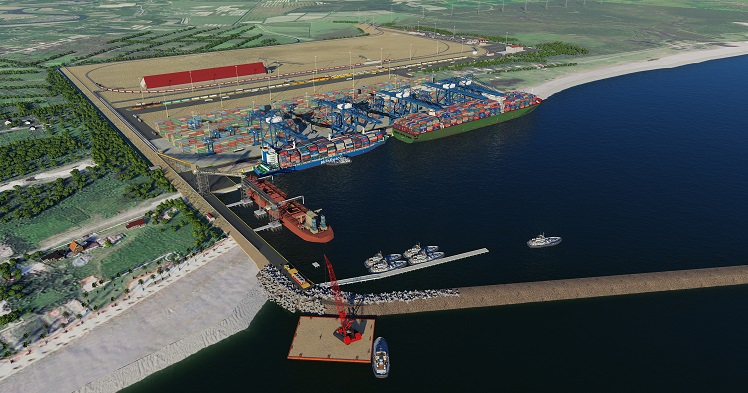 Anaklia Deep Sea Port is sheduled to be completed by 2020. Image by Anaklia Consortium.

He stated he is ashamed of the activities of the country’s Interior Ministry and the Prosecutor’s Office “because of the absurd accusations.”

We have presented all the documentation proving the legality of the transaction,” Khazaradze said.

Georgian Economy Minister Natia Turnava said that the Anaklia Port is of top importance for the government and it faces no threats due to the case.

Georgian Prime Minister Mamuka  Bakhtadze stated earlier that connecting the case with  the Anaklia Port “is a cheap speculation.”

Anaklia Deep Sea Port is a 2.5 billion USD project which is scheduled to be completed by 2020, connecting Europe and Asia with an alternative, short route.

Khazaradze represents TBC Holding in the Anaklia Consortium, which won the government-announced tender back in 2016 to attract funds for the port’s construction.